BREAKING NEWS! A-Rod Banned From 2014 Season ... Will Take Fight To Federal Court ... It's Only Going To Get Uglier From Here 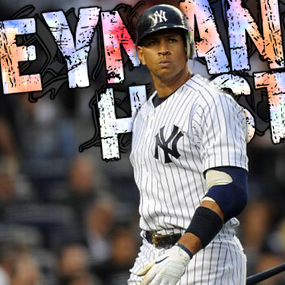 Arbitator’s decision endorses MLB’s accusations. Ban includes post-season. A-Rod not going away quietly! Brace yourselves, New York. This is going to be a headline-grabbing fight for quite some time!

Alex Rodriguez, a one time shoe-in for the Baseball Hall of Fame and arguably Major League Baseball’s biggest star, was knocked out of the park this morning by a historic drug suspension that encompasses all of the 2014 season, including the postseason, and will cost the Yankee third baseman $25 million in this year’s salary, plus millions in any performance incentives he would have earned.

The ban comes after a year of vicious attacks on Major League Baseball and the New York Yankees, public denials that A-Rod acquired massive amounts of performance-enhancing drugs from a Miami firm that was a cover for a PED distributor, and millions in legal bills from a team of high-profile lawyers, crisis managers and private investigators.

OK, Hustlers … here’s what it came down to: Arbitrator Fredric Horowitz struck the 14-time All-Star and 3-time MVP with the 162-game suspension, plus the offseason, in an endorsement of MLB’s accusations that Rodriguez scored an array of PEDs from Biogenesis, a now-closed-down Miami-area anti-aging clinic operated by Anthony Bosch, in clear violation of the game’s collectively bargained drug program.

Rodriguez announced the suspension, the longest drug suspension in the history of the program, this morning in a long statement in which he denied having used performance-enhancing drugs in the period in question and calling the ruling an “injustice,” invoking what he called a “threat to guaranteed contracts,” and vowing to take the fight to federal court. “The number of games  sadly comes as no surprise, as the deck has been stacked against me from day one,” Rodriguez said. “This is one man’s decision, that was not put before a fair and impartial jury, does not involve me having failed a single drug test, is at odds with the facts and is inconsistent with the terms of the Joint Drug Agreement and the Basic Agreement, and relies on testimony and documents that would never have been allowed in any court in the United States because they are false and wholly unreliable.  This injustice is MLB’s first step toward abolishing guaranteed contracts in the 2016 bargaining round, instituting lifetime bans for single violations of drug policy, and further insulating its corrupt investigative program from any variety defense by accused players, or any variety of objective review.”

“I have been clear that I did not use performance enhancing substances as alleged in the notice of discipline, or violate the Basic Agreement or the Joint Drug Agreement in any manner, and in order to prove it I will take this fight to federal court.  I am confident that when a Federal Judge reviews the entirety of the record, the hearsay testimony of a criminal whose own records demonstrate that he dealt drugs to minors, and the lack of credible evidence put forth by MLB, that the judge will find that the panel blatantly disregarded the law and facts, and will overturn the suspension.  No player should have to go through what I have been dealing with, and I am exhausting all options to ensure not only that I get justice, but that players’ contracts and rights are protected through the next round of bargaining, and that the MLB investigation and arbitration process cannot be used against others in the future the way it is currently being used to unjustly punish me.”

Both MLB and the Players Association cited their respect for the arbitration process.

“The MLBPA strongly disagrees with the award issued today in the grievance of Alex Rodriguez, even despite the Arbitration Panel’s decision to reduce the duration of Mr. Rodriguez’s unprecedented 211-game suspension,” the union said in a statement. “We recognize that a final and binding decision has been reached, however, and we respect the collectively-bargained arbitration process which led to the decision.”

MLB said that while it believed the original 211-game suspension was appropriate, “we respect the decision rendered by the Panel and will focus on our continuing efforts on eliminating performance-enhancing substances from our game.”

For the 38-year-old Rodriguez, the ruling represents a death blow to his already PED-tainted career, even though the decision by Horowitz reduces the 211-game ban baseball commissioner Bud Selig imposed in August and is based on non-analytical evidence …  Rodriguez has not failed a drug test since baseball’s 2003 survey testing year. He clearly will not take that small victory as a sensible stopping point in his legal crusade, however, and will continue his legal battle. Rodriguez has already commenced a lawsuit against the league and others he claims have conspired to frame him as the most tainted ballplayer since Barry Bonds and Roger Clemens.

The decision comes about seven weeks after Rodriguez stormed out of his grievance hearing on Nov. 20, professing that he had been treated unfairly. The walkout saved him at the last minute from going under oath with denials.

Assuming the suspension stands (and it’s probably going to stand, as it is highly unlikely a judge would interfere with a ruling issued under binding arbitration), Rodriguez’s suspension is immediately effective, meaning he may be shut out from spring training as well as the actual season, depending on how Horwitz’s ruling is interpreted.

The decision wraps up a tumultuous process that began Aug. 5, the day Selig banned Rodriguez for doping and interfering with MLB’s Biogenesis probe. While Rodriguez immediately elected arbitration, more than a dozen other players implicated in the scandal accepted their bans. Most of them have already served 50-game suspensions (Milwaukee Brewers outfielder Ryan Braun accepted a 65-game suspension) and are now free to take the field in spring training. If, for example, Rodriguez is allowed to show up at spring training, the Yankees could simply send him across the street to the minor league camp. And what a can of worms THAT would open.