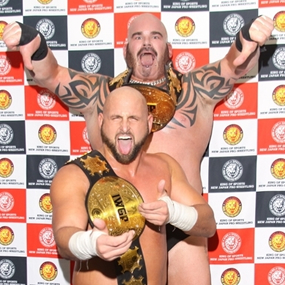 Prev1 of 6Next
Use your ← → (arrow) keys to browse
EXCLUSIVE PHOTOS BY GEORGE TAHINOS!

Giant Bernard, who may be better known to United States wrestling fans as WWE Superstar A-Train, has made history in The Land of The Rising Sun by teaming with Karl Anderson and becoming the first team in history to hold both the New Japan IWGP Tag Team Championship and the Pro Wrestling NOAH GHC TAG Team Titles! Bernard and Anderson defeated Takayama & Takuma Sano in a Title vs Title Match when Bernard pinned Sano with the Bernard Driver at 12:03 into the encounter, which took place at the Osaka Furitsu Gym.

Of course, we’re HustleTweeting about this historic tag team title unification, and you’re more than welcome to join the conversation by following THE HEYMAN HUSTLE on Twitter HERE or write to us directly at hustleoncrave@gmail.com  You can also subscribe (for FREE, cheapos, absolutely FREE) to our Ultra High Quality YouTube Channel HERE, and don’t forget to check out our old school social networking skills by visiting us on Facebook HERE and even on MySpace HERE