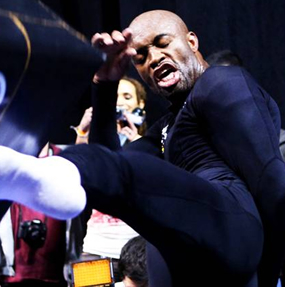 The UFC Middleweight Champion of the World Comments on Reports of Personal Animosity with Vitor Belfort Going Into This Saturday Night’s Main Event in Las Vegas!

As THE HEYMAN HUSTLE reported yesterday, the UFC 126 pre-fight press conference was highlighted by the INTENSE FACE-TO-FACE BETWEEN ANDERSON SILVA AND VITOR BELFORT, who will face each other this Saturday night for the UFC Middleweight Championship at the sold out Mandalay Bay Events Center.

Today, Silva put on a great show during his open workout, and commented on the reports this fight with Belfort is very personal for both fighters.

Silva sparred with his 12 year old son, Kalyl in a 30 minute session in front of between 600 and 700 fans. “I always train with my son,” Silva said, “It’s a really good experience for him in mixed martial arts.”

When it was pointed out to Silva that it appeared he and Belfort were filled with hatred for each other WHEN THEY CAME FACE-TO-FACE AT THE PRESS CONFEFENCE, Silva simply said through his translator the face-off was "normal," and “I don’t think there was anything different.”

We’re HustleTweeting about Anderson Silva vs Vitor Belfort, and you’re more than welcome to join the conversation! Follow The Hustle on Twitter HERE or write to us at hustleoncrave@gmail.com

CLICK ON THE PICS BELOW TO SEE THE ENTIRE GALLERY FROM
ANDERSON SILVA’S PUBLIC WORKOUT FOR UFC 126!