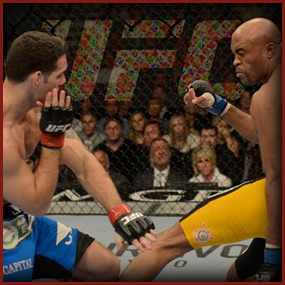 No one knew when we’d see Anderson Silva again after his leg was snapped in half at UFC 168. It turns out, we didn’t have to wait all that long. “The Spider” has posted a photo … and he’s all smiles!

Anderson Silva has started the long road to recovery, and he’s taking his first step with a big smile on his face. The legendary “Spider” broke his left tibia and fibula in the main event of UFC 168 when he threw an inside leg kick that UFC Middleweight Champion Chris Weidman lifted his left leg to check. Silva’s left shin made contact with the inside of Weidman’s left knee, and the result was one of the most gruesome injuries in the history of UFC. To see the once-invinceable Silva writhing on the mat, screaming in pain was as surreal a moment UFC fans have ever experienced.

Silva was rushed into surgery, where a titanium rod was placed in Silva’s leg to stabilize his tibia, and his fibula was reset. The surgery took about an hour, and speculation began as to when Silva would be able to ever train again, or even walk. The injury is severe to say the least. The road to recovery is very long.

Anderson Silva didn’t keep us waiting long. The Spider has posted a photo of himself on HIS TWITTER PAGE, stating “I want to say thank you to all my fans and friends to support me at this moment,I wish a great and happy 2014 to all”

CLICK HERE TO SEE GRAPHIC FOOTAGE OF THE ACTUAL INCIDENT FROM UFC 168!

Of course, we’re HustleTweeting about Anderson Silva, and you’re more than welcome to join the conversation by following THE HEYMAN HUSTLE on Twitter HERE or write to us directly at hustleoncrave@gmail.com  Hey, have you checked out the Hustle’s Ultra High Quality You Tube Channel, with exclusive videos featuring OUR WORLD EXCLUSIVE WITH MIKE TYSON … BROCK LESNAR’S “HERE COMES THE PAIN” … ICE-T AND COCO’s SEX SECRETS … TEEN SENSATION TAYLOR MOMSEN … UFC BAD BOY NICK DIAZ … THE WALKING RIOT MISSY HYATT if you’re not subscribing, you’re missing something … and by the ways cheapos, it’s FREE! Yes, absolutely 100 percent FREE! What are you waiting for? Check it out HERE!

I want to say thank you to all my fans and friends to support me at this moment,I wish a great and happy 2014 to all pic.twitter.com/nzhmvoNSca