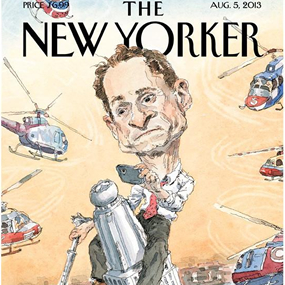 The Mayoral Hopeful straddles The Empire State Building as his sexting scandal erupts all over New York City!

Anthony Weiner is making headlines in New York, but not the kind he’s been dreaming about since being forced to resign his congressional seat in 2009 over a sexting scandal. A long and hard (no pun intended) road back to the public spotlight has Weiner running for the Mayor’s Office in NYC, as Michael Bloomberg completes his final term. The revelation Weiner has been sexting no less than six women again has de-railed his campaign. He’s sunk in the polls, where he was number one in the running for the Democratic nomination.

The August 5th edition of The New Yorker will feature, a painting of the sex-plagued politician straddling the top of the Empire State Building, a smartphone in his left hand and the fabled building’s spire snapped off and clutched in his right. “With a topic like Anthony Weiner, how can you find anything broad or funny that he hasn’t already personally breached?” artist John Cuneo noted.“Free association made me think of the Empire State Building, and then King Kong, the iconic image of him straddling it.”

Of course, we’re HustleTweeting about Anthony Weiner, and you’re more than welcome to join the conversation by following us on twitter HERE or write us directly at hustleoncrave@gmail.com  Hey, have you checked out the Hustle’s Ultra High Quality You Tube Channel, with exclusive videos featuring OUR WORLD EXCLUSIVE WITH MIKE TYSON … BROCK LESNAR’S “HERE COMES THE PAIN” … ICE-T AND COCO’s SEX SECRETS … TEEN SENSATION TAYLOR MOMSEN … UFC BAD BOY NICK DIAZ … THE WALKING RIOT MISSY HYATT if you’re not subscribing, you’re missing something … and by the ways cheapos, it’s FREE! Yes, absolutely 100 percent FREE! What are you waiting for? Check it out HERE!