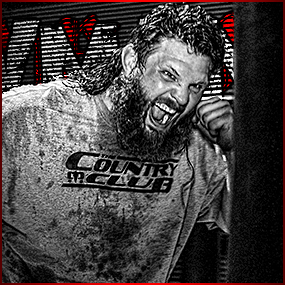 “Big Country” is set to fight Josh Barnett in the main event of UFC Fight Night 75, as THE HEYMAN HUSTLE is granted unprecedented access into the Heavyweight’s last days before battle!

When you first look at Roy Nelson, you get the feeling you’re looking at an All-American country boy. Hence the nickname “Big Country” … but you’d probably be surprised he was born, raised and lives in Las Vegas, Nevada! A logical presumption would be that big city, bright lights will one day have to change this good ol’ boy, but I’d argue against that. As my husband Ary Dalton worked with Roy on this EXCLUSIVE photo shoot, I observed that the UFC Heavyweight contender is of the most genuine human beings I’ve encountered, a true “what you see is what you get” type of guy. He’s a total sweetheart. He just happens to be one of the scariest one-punch-knockout-artists in UFC history.

We witnessed (and covered) Roy’s training at The House of  RYU, where his focus was as intense as his training was diverse. While Roy is known for his stand up, he also showcased grappling and submission skills showing exactly why he holds a black belt in Brazilian Jiu-Jitsu.

Watching his every move in person demonstrated he has come far even from his impressive Ultimate Fighter reality show days. He was even overheard telling his training partner to “go for it” and “never take it easy!”

As Roy gets ready for his slugfest tonight with the equally impressive Josh Barnett, we can’t help but marvel at the work ethic displayed by this “every man” whose fantasy meal after a fight is to grab a couple of cheeseburgers as the ULTIMATE reward for this most entertaining FIGHTER!

Of course, we’re HustleTweeting about our EXCLUSIVE Look at Roy Nelson, and you’re more than welcome to join the conversation by following the Hustle on Twitter HERE or write to us directly at hustleoncrave@gmail.com Hey, have you checked out the Hustle’s Ultra High Quality You Tube Channel, with exclusive videos featuring the #HUSTLEBOOTYTEMPTATS SUPERMODEL OF THE YEAR … OUR WORLD EXCLUSIVE WITH MIKE TYSON … BROCK LESNAR’S “HERE COMES THE PAIN” … ICE-T AND COCO’s SEX SECRETS … MMA BAD BOY NICK DIAZ … the list goes on and on, so if you’re not subscribing, you’re missing something … and by the ways cheapos, it’s FREE! Yes, absolutely 100 percent FREE! What are you waiting for? Check it out HERE