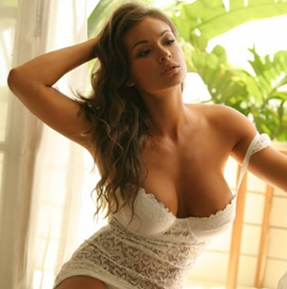 She’s a 23 year old model whose perfectly proportioned 5’6” 125 pound frame carried her to the top of the Southern-modeling world in record time. A self-described “country girl,” she moved to Nashville seeking opportunity, and was immediately cast in an independent film starring 90210’s Luke Perry. But before she could even start thinking about promoting her film debut, she was hired as an emcee-host by the NBA Memphis Grizzlies’ basketball team. Ashley Ann Vickers, as you can clearly see, was on a roll.

Then she got the chance to work with our old compadres at World Wrestling Entertainment, and before you could say “Laurinaitis” (go ahead, try to say it … we’ll wait for you), Ashley became NXT interviewer “Ashley Valence.”

So now Ashley is juggling (take the high road folks, it’s too easy a joke) her WWE career along with her hot modeling career. And all along the way, this gorgeous brunette continues to surprise everyone with her ambitious nature and ability to multi-task.

Now, if we can only get her to do more photos like these!

We’re HustleTweeting about Ashley Ann Vickers right now, and you’re more than welcome to join the conversation by following the Hustle on Twitter HERE or by hitting LIKE on our hyper-interactive Facebook page HERE!