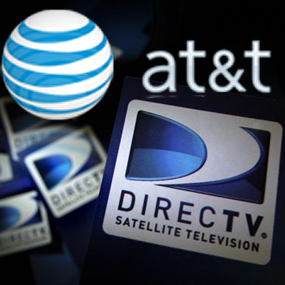 In the shadow of the Comcast / Time Warner merger, AT&T makes a major move!

AT&T is purchasing satellite television operator DirecTV for $48.5 billion, a move that looks to shift the balance of power in the media world as the broadband Internet and video industries continue to evolve.With this acquisition, AT&T becomes the latest telecommunications giant seeking to establish an even greater reach. It was in February when Comcast agreed to buy Time Warner Cable for $45 Billion. It was a clear message that Comcast intended to become the most dominant provider of cable TV and high-speed Internet access. Sprint, which is controlled by the Japanese telecom company Softbank, has made it known it seeks to merge with T-Mobile USA, creating a serious rival to Verizon and AT&T.

“The media chessboard is moving more this year than it has in the past decade,” said Richard Greenfield, a media analyst with the brokerage firm BTIG. “You’re seeing major shifts. Everyone is jockeying for position.”

The newest round of consolidation may weigh heavily on the minds of government regulators, who have expressed growing concern that the nation’s television and Internet services are increasingly controlled by just a few corporate behemoths.
For consumers, the acquisition may change little, at least at first, since AT&T and DirecTV share little overlap. AT&T said on Sunday that it planned to bundle its new acquisition’s services with existing offerings like broadband Internet and cellphone service.

To some analysts, AT&T’s latest acquisition seems questionable. The pay television business is considered a mature market whose subscriber growth has slowed sharply in recent years. This is just one of the many reasons you’ve been companies like WWE go into what our own Hustler De Tuti Hustlers Paul Heyman calls “the self-distribution model” and launch WWE Network.

AT&T has been trying to compensate for slowing growth in its own core businesses, including by moving into home security offerings and mobile data for cars.

Randall L. Stephenson, AT&T’s chief executive, said in an interview on Sunday that he had discussed the possibility of buying DirecTV with his counterpart at the satellite TV provider, Mike White, for some time.

By acquiring the country’s biggest satellite television operator, AT&T would gain more clout in negotiating with media companies as it increasingly focuses on video offerings. Through the deal, AT&T would become the country’s second-biggest pay TV provider, behind only Comcast.

AT&T has about 5.7 million TV customers through its U-verse service, while the satellite TV operator has about 20.3 million customers in the United States.

The acquisition would also bring to AT&T the existing content on DirecTV at a time when AT&T has made video services a priority. DirecTV’s offerings include the NFL’s “Sunday Ticket,” and it owns minority stakes in the Game Show Network and MLB Network.

It would also help get AT&T into new markets like video and data services inside airplanes.

“If you think about what we’re trying to accomplish, we’re trying to get way down the road to get content across multiple devices,” Mr. Stephenson said. “The more we peeled the onion back, frankly the better we felt about this.”

DirecTV would also bolster AT&T’s financial resources as it continues to invest in wireless-broadband capabilities, an effort that is expected to include bidding at least $9 billion for wireless network spectrum in a forthcoming government auction. The satellite TV company generated about $2.6 billion in free cash flow last year. Buying DirecTV would also expand AT&T’s presence in Latin America, where the satellite company already has more than 18 million customers and expects to grow substantially as more households subscribe to pay TV services.

Under the terms of the agreement, AT&T would pay $95 a share in stock and cash, which is roughly 10 percent higher than DirecTV’s closing stock price on Friday and about 30 percent higher than where its shares were trading before word of a potential transaction began to emerge. Including the assumption of DirecTV’s debt, the deal is worth about $67.1 billion. Existing DirecTV shareholders would own 15 to 16 percent of the combined company after closing, which is expected in a year’s time. Of course, we’re HustleTweeting about this latest acquisition, and you’re more than welcome to join the conversation by

writing us on twitter HERE or write to us directly at hustleoncrave@gmail.com Hey, have you checked out the Hustle’s Ultra High Quality You Tube Channel, with exclusive videos featuring OUR WORLD EXCLUSIVE WITH MIKE TYSON … BROCK LESNAR’S “HERE COMES THE PAIN” … ICE-T AND COCO’s SEX SECRETS … MMA BAD BOY NICK DIAZ … the list goes on and on, so if you’re not subscribing, you’re missing something … and by the ways cheapos, it’s FREE! Yes, absolutely 100 percent FREE! What are you waiting for? Check it out HERE!