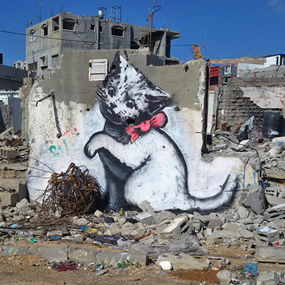 A New Short Film and Powerful Art is the World’s Most Famous Graffiti Artist’s Latest Statement!

Banksy is back, in the middle of controversy, having unveiled his latest politically charged creation online on Thursday, posting on Instagram a photograph of a weeping figure, which the artist tagged with the hashtags #Banksy and #Gaza. A two-minute movie was also posted on his website, with short clips of Palestinian citizens standing amid rubble and what appear to be armed Israeli soldiers. The clip, a parody of a tourism video, is peppered with captions, like “the locals like it so much they never leave…. (Because they’re not allowed to).”

The artist also posted two other artworks that he created in the area … a silhouette of a group of children swinging around a foreboding watchtower …  and a disarmingly childlike picture of a cat, with a caption explaining that he created the image because “on the Internet people only look at pictures of kittens.” The short film also shows a quotation scrawled by the artist onto a wall: “If we wash our hands of the conflict between the powerful and the powerless we side with the powerful — we don’t remain neutral.”

A publicist for the artist would not reveal where in the region the images were taken, or when. But she released a quote she attributed to Banksy: “I don’t want to take sides. But when you see entire suburban neighborhoods reduced to rubble with no hope of a future — what you’re really looking at is a vast outdoor recruitment center for terrorists. And we should probably address this for all our sakes.”

Banksy has a history of creating political works in and beyond his native Britain. In 2005, he tagged a series of images along the West Bank wall, and in 2007 he returned, painting images including a now-iconic rendering of a young girl patting down an Israeli soldier.

Of course, we’re HustleTweeting about Banksy and you’re more than welcome to join the conversation by following the Hustle on Twitter HERE or write to us directly at hustleoncrave@gmail.com Hey, have you checked out the Hustle’s Ultra High Quality You Tube Channel, with exclusive videos featuring OUR WORLD EXCLUSIVE WITH MIKE TYSON … BROCK LESNAR’S “HERE COMES THE PAIN” … ICE-T AND COCO’s SEX SECRETS … MMA BAD BOY NICK DIAZ … the list goes on and on, so if you’re not subscribing, you’re missing something … and by the ways cheapos, it’s FREE! Yes, absolutely 100 percent FREE! What are you waiting for? Check it out HERE!

CLICK ON THE PICS BELOW TO SEE THE ENTIRE PHOTO
GALLERY FEATURING BANKSY’S CONTROVERSIAL NEW WORK IN GAZA!