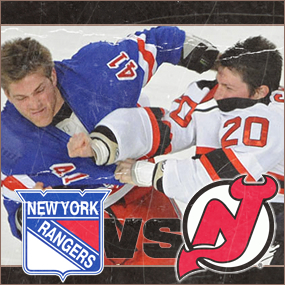 And Now, Ladies and Gentlemen, It’s Time For Your Main Event of The Evening, And It’s Taking Place The Moment Right at The Opening Faceoff. Live From The World’s Most Famous Arena, Madison Square Garden, It’s The Rangers vs Devils, and The Fight is On!

he New York Rangers, tired of the publicity JEREMY LIN has been getting at Madison Square Garden, must have heard about the WWE sellout at MSG on Sunday, as they showed up Monday looking to cover the ice in blood. Not their own blood, of course, but the blood of the visiting New Jersey Devils, who took a beating that was worthy of sending them back across the Hudson River.

The Rangers and the Devils faced each other in a nationally televised game on Monday night, and kicked off the broadcast with a six man brawl, three separate fights, right at the moment the game started. The moment the ref dropped the puck, the fights were on. The way the Rangers are looking at it, the Devils sent a message right off the top by putting their toughest … and least played … line out to start. So the Rangers, on their home turf, countered with two of their toughest forwards and a defenseman who moved up to take the opening draw. Six players agreed to fight to set the tone, and away we went.

At three seconds of the first period, Cam Janssen, Eric Boulton and Ryan Carter of the Devils were given five for fighting while Bryce Salvador was given a 10-minute misconduct. Salvador’s misconduct came when he interjected in the Carter/Bickel fight when Carter was cut and bleeding on the ice. Both players suffered some battle damage in their fight.

For the Rangers, Mike Rupp, Stu Bickel and Brandon Prust were given five for fighting.

The crowd at Madison Square Garden, for whatever its worth (and to us Hustlers, it’s worth a lot!) loved it.

The Rangers defeated the Devils, 4-2. The crowd may have even loved that a little bit more.

Hey, we’re HustleTweeting about this brawl, and you’re more than welcome to join the conversation by THE HEYMAN HUSTLE on Twitter HERE or write to us directly at hustleoncrave@gmail.com  Hey, have you checked out the Hustle’s Ultra High Quality You Tube Channel, with  exclusive videos featuring BROCK LESNAR’S “HERE COMES THE PAIN”  … ICE-T AND COCO’s SEX SECRETS … THE ULTIMATE WELTERWEIGHT BAD ASS NICK DIAZ … CONTROVERSIAL TEEN SENSATION TAYLOR MOMSEN … LEGENDARY MMA PIONEER FRANK SHAMROCK … THE WALKING RIOT MISSY HYATT … if you’re not subscribing, you’re missing something … and by the ways cheapos, it’s FREE! Yes, absolutely 100 percent FREE! What are you waiting for? Check it out HERE! 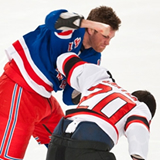 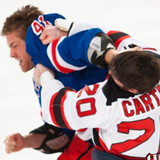 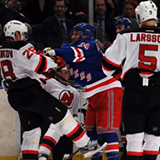 LIVE FROM MADISON SQUARE GARDEN … IT’S THE RANGERS VS THE DEVILS! 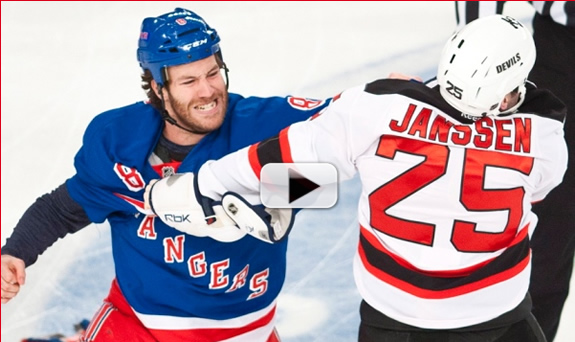