BREAKING BAD: "Walter White, You Have The Right To Remain Silent" 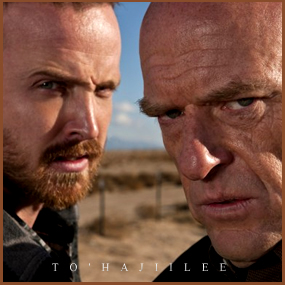 Hank Schrader has finally spoken the words fans of “Breaking Bad” have imagined him saying since day one. “Walter White, you have the right to remain silent.”  But anyone paying attention has seen the flash-forwards, the ones in which Walt is clearly not in jail, has assumed a new identity and seems to be planning some violent, possibly ricin-related act of vengeance. So once again, we sit at the edge of our chairs, watching this nail-bitingly-tense moment, thinking to ourselves WTF?

But there we, the collective audience, were. Sitting in front of our tv sets. Our jaws dropped to the ground as Walt was cuffed and shoved into the backseat of Hank’s truck and Jesse Pinkman was sporting that “I just won this war” half-smile. And that’s when the series got even more dramatic, went further than it had gone before. Todd, his Uncle Jack and the white supremacist posse attacked started a wild shoot-out.

And then, right in the middle of the shoot-out, the episode just ended. Boom. Bang. Poof. Thank you for watching, getting involved, caring, and come back next week. Suddenly, it was just over this week. WTF?

It was impossible to absorb that ending without thinking back to the “Sopranos” cut-to-black series finale. That homage must have been a deliberate move on the writers and director’s parts. Want us to defend this conspiracy theory? Well, how’s this? Earlier in this episode, we also heard “Oh Sherrie” as sung by Steve Perry, the Journey lead singer who also sang “The Sopranos” closer “Don’t Stop Believin’.” Uh huh.

By concluding the episode this way, Vince Gilligan is probably promising us a more conclusive ending than “The Sopranos.” We’re going to find out what happens to Walter White. We just may not like it.

Of course, we’re HustleTweeting about “Breaking Bad” and you’re more than welcome to join the conversation by following us on twitter HERE or write us directly at hustleoncrave@gmail.com  Hey, have you checked out the Hustle’s Ultra High Quality You Tube Channel, with exclusive videos featuring OUR WORLD EXCLUSIVE WITH MIKE TYSON … BROCK LESNAR’S “HERE COMES THE PAIN” … ICE-T AND COCO’s SEX SECRETS … TEEN SENSATION TAYLOR MOMSEN … UFC BAD BOY NICK DIAZ … THE WALKING RIOT MISSY HYATT if you’re not subscribing, you’re missing something … and by the ways cheapos, it’s FREE! Yes, absolutely 100 percent FREE! What are you waiting for? Check it out HERE!