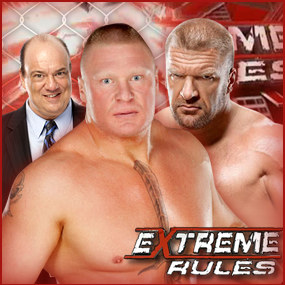 Brock Lesnar’s physical decimation of The Three Man Band on WWE Monday Night RAW set the stage for our very own Hustler De Tuti Hustlers Paul Heyman to issue a down and dirty, old school EXTREME challenge to Triple H!

The aftermath of WWE WrestleMania XXIX has set the stage for WWE Extreme Rules, as our very own Hustler De Tuti Hustlers Paul Heyman joined The Beast Incarnate Brock Lesnar in the ring once Brock destroyed The Three Man Band, and our boss issued a memorable challenge to The Game.

What began as a form of protest by 3MB turned into something much more sinister, as Brock Lesnar made his first appearance since WrestleMania 29 with an ominous challenge for the man who defeated him.

The would-be rockers had come to Raw to demand an apology for The Shield for their attack on SmackDown, but all they got was another thrashing at The Anomaly’s hands. It appears Lesnar’s loss to The King of Kings has done nothing to diminish his craving for mayhem: standing amid the wreckage of 3MB, Paul Heyman took hold of the mic and laid a challenge at Triple H’s feet: a match inside of a Steel Cage at Extreme Rules to settle the two titans’ brutal rivalry for good.

Of course, we’re HustleTweeting about Brock Lesnar, Paul Heyman and HHH, and you’re more than  welcome to join the conversation by following us on twitter HERE or write us directly at hustleoncrave@gmail.com  Hey, have you checked out the Hustle’s Ultra High Quality You Tube Channel, with exclusive videos featuring OUR WORLD EXCLUSIVE WITH MIKE TYSON … BROCK LESNAR’S “HERE COMES THE PAIN” … ICE-T AND COCO’s SEX SECRETS … TEEN SENSATION TAYLOR MOMSEN … UFC BAD BOY NICK DIAZ … THE WALKING RIOT MISSY HYATT if you’re not subscribing, you’re missing something … and by the ways cheapos, it’s FREE! Yes, absolutely 100 percent FREE! What are you waiting for? Check it out HERE!

CLICK ON THE PICS BELOW TO SEE THE ENTIRE OFFICIAL WWE PHOTO
GALLERY FEATURING BROCK LESNAR AND PAUL HEYMAN FROM RAW!

THE CHALLENGE IS ISSUED FOR EXTREME RULES! 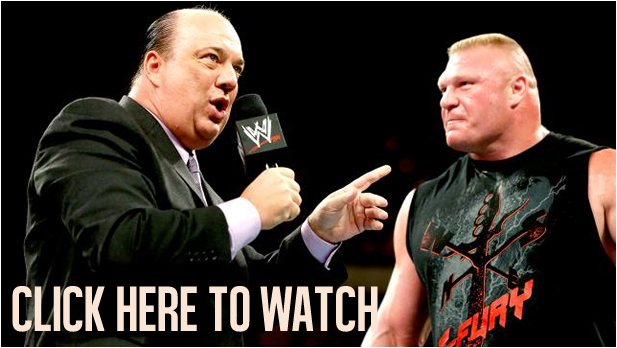