We Told You So ... Brock Lesnar is Ready For A Fight! 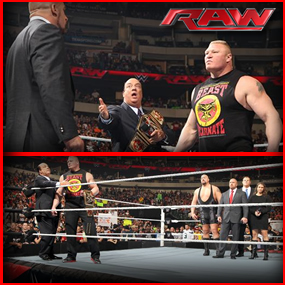 The Beast Incarnate and Our Very Own Hustler De Tuti Hustlers Paul Heyman Storm The Ring at the Beginning of WWE Monday Night RAW!

Just minutes before WWE Monday Night RAW went on the air, we broke the news that BROCK LESNAR WAS GOING TO STORM THE RING TO KICK OFF THE SHOW … we were 100 percent right. And then all Hell broke loose! According to WWE.com:

DALLAS — Brock Lesnar is not amused. Suffering a Curb Stomp from your self-proclaimed usurper will certainly do that to you, so it was hard to begrudge The Beast Incarnate his sour mood when he stormed onto Raw and demanded Seth Rollins make good on his SmackDown grandstanding and fight. The Authority was as quick as ever to rally around their standard-bearer, and John Cena’s appearance completed the playing field.

Cena’s rousing rhetoric remained unchanged despite suffering the same indignity as Lesnar last week. The 15-time World Champion repeated his plan to win Lesnar’s WWE World Heavyweight Title and to hold it hostage until Dolph Ziggler, Ryback and Erick Rowan were reinstated. His overzealousness may cost him yet, though. The Authority agreed to put Cena in a match that would reinstate the trio if he won, and excise him from the Triple Threat Title Match if he lost … provided the WWE Universe votes for it to happen at all, on the WWE App.

Of course, we’re HustleTweeting about Paul Heyman and Seth Rollins, and you’re more than welcome to join the conversation by following the Hustle on Twitter HERE or write to us directly at hustleoncrave@gmail.com Hey, have you checked out the Hustle’s Ultra High Quality You Tube Channel, with exclusive videos featuring OUR WORLD EXCLUSIVE WITH MIKE TYSON … BROCK LESNAR’S “HERE COMES THE PAIN” … ICE-T AND COCO’s SEX SECRETS … MMA BAD BOY NICK DIAZ … the list goes on and on, so if you’re not subscribing, you’re missing something … and by the ways cheapos, it’s FREE! Yes, absolutely 100 percent FREE! What are you waiting for? Check it out HERE! 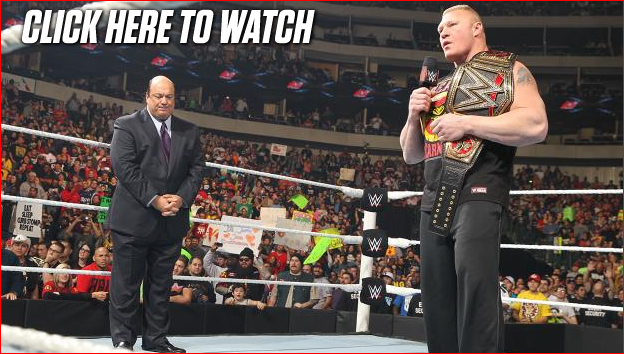