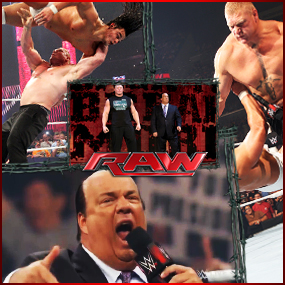 WWE Monday Night RAW From The Barclays Center in Brooklyn, NY Kicks Off with The Beast and His Advocate!

You just knew it would be a non-PG kickoff to RAW as our boss Paul Heyman advocated the position(s) of “The Beast of the Barclays” Brock Lesnar. Controversially comparing people’s “Pavlovian” belief in The Undertaker to a belief that Santa Claus or The Easter Bunny are real, Paul ripped into Undertaker‘s tainted victory at WWE SummerSlam, demonstrating The Phenom had tapped out to Brock Lesnar‘s Kimura Lock. According to the report posted on WWE.com:

Glory, glory … The Undertaker? Not if Paul Heyman has anything to say about it. Even though The Phenom technically defeated Brock Lesnar at SummerSlam, the initial tap-out, unseen by the official, means The Conqueror and his advocate have a few issues with the victor of record. After some preliminary orating, The Beast and Heyman called out The Deadman for Round 3, and the call was indeed answered … by Bo Dallas.

The good news, as preached by the former NXT Champion, was that Brock Lesnar could indeed get retribution against The Deadman, if he only Bo-lieves. Five suplexes later, Dallas didn’t have much to say, but Paul Heyman did acknowledge, as Bo went spinning for a final F-5, that The Beast does Bo-lieve. So at least there’s that.

Of course, we’re HustleTweeting about WWE Monday Night RAW, and you are more than welcome to join by following the Hustle on Twitter HERE or write to us directly at hustleoncrave@gmail.com Hey, have you checked out the Hustle’s Ultra High Quality You Tube Channel, with exclusive videos featuring the #HUSTLEBOOTYTEMPTATS SUPERMODEL OF THE YEAR … OUR WORLD EXCLUSIVE WITH MIKE TYSON … BROCK LESNAR’S “HERE COMES THE PAIN” … ICE-T AND COCO’s SEX SECRETS … MMA BAD BOY NICK DIAZ … the list goes on and on, so if you’re not subscribing, you’re missing something … and by the ways cheapos, it’s FREE! Yes, absolutely 100 percent FREE! What are you waiting for? Check it out HERE!

CLICK ON THE PICS BELOW TO SEE THE OFFICIAL WWE PHOTO GALLERY FEATURING BROCK LESNAR AND PAUL HEYMAN AT THE BARCLAYS IN BROOKLYN! 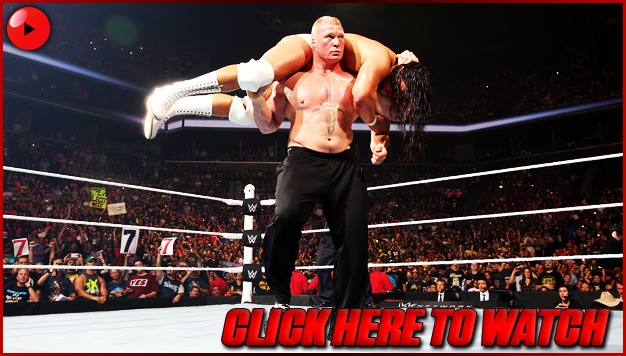