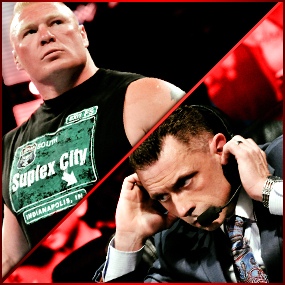 The Beast Incarnate and Our Very Own Hustler De Tuti Hustlers Paul Heyman shock the WWE Universe with the terms and conditions of their return to Monday Night RAW!

Our boss Paul Heyman couldn’t help but mention The Authority didn’t need Brock Lesnar‘s money, but that they wanted The Beast Incarnate to apologize to Michael Cole and JBL for THIS VIOLENT ACT THE DAY AFTER THIS YEAR’S WRESTLEMANIA! So the apology was to take place in the very first segment of this week’s edition of RAW, and it was a memorable, tense few minutes.

That sound you hear isn’t only the rumble of Brock Lesnar’s return, but also the distant shuffling of papers officially negating The Beast Incarnate’s suspension. As wheeled and dealt by Paul Heyman, The Conqueror has added litigation to his list of vanquished foes. Lesnar’s first order of business on his first Raw back was to seal the proverbial deal by “apologizing” to JBL and Michael Cole for laying them out back in March. He accomplished it through a pair of vaguely menacing handshakes to The Wrestling God and a noogie to a petrified Cole.

With those pleasantries out of the way, it was back to the task at hand: Lesnar vs. Seth Rollins for the WWE World Heavyweight Title that The Anomaly never really lost. Heyman was practically frothing at the mouth to hype the match. Not just for the “This time it’s personal” vibe that typically accompanies such confrontations, but because both the advocate and his conquering client were 1000 percent confident that the title would soon be restored around Lesnar’s waist. For the first time in a long time, the WWE Universe seemed to agree with them.

CLICK ON THE PICS BELOW TO SEE THE ENTIRE OFFICIAL
WWE PHOTO GALLERY FEATURING BROCK LESNAR AND PAUL HEYMAN! 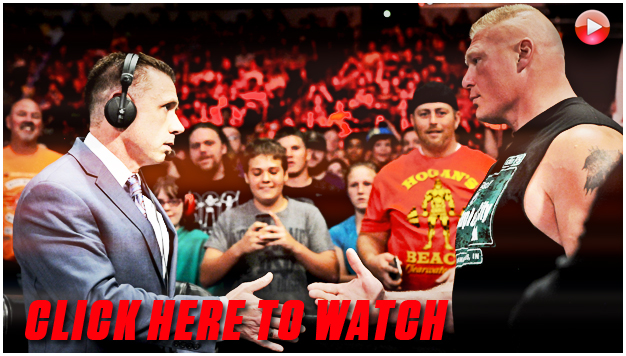