It took 13 suplexes and an F5 on a stack of chairs, but Brock Lesnar prevailed over Dean Ambrose in their No Holds Barred Street Fight at WrestleMania 32 in front of over 100,000 fans live (and millions watching on the WWE Network and on pay per view) at AT&T Stadium in Dallas, Texas. Our boss Paul Heyman was ringside in The Conqueror’s corner for the affair, which Paul called “the moment you’ve all been waiting for” before hysterically billing Brock from “The University of Violence!” According to WWE.com:

Some WrestleMania matches are contested over titles, others for pride. In the case of the No Holds Barred Street Fight between Brock Lesnar and Dean Ambrose, the one and only purpose was menacing, unadulterated carnage. And when the bodies were broken and traces of destruction were visible in every direction, it was ultimately The Beast who reigned supreme with 13 German Suplexes and one thunderous F-5 on a heap on steel chairs.

It was no secret that Ambrose would enter The Show of Shows well-prepared; after all, he was armed to the teeth with the numerous instruments of destruction that he collected in the weeks leading up to the anything-goes free-for-all, with perhaps his greatest weapon being his own unhinged nature. Yet, arguably nothing in his possession was as battle-tested or dangerous as the ruthless Conqueror who would target him at every turn.

The brutal chaos started at the opening bell. Though Ambrose dove head-first into the lair of the Beast, Lesnar quickly sent him on a detour into Suplex City. It was a place Ambrose would unfortunately become well acquainted with before the night was through.

Ambrose’s subsequent kendo stick counter-assault did little to stop his opponent, as Brock destroyed one of the implements simply to signify that he didn’t need any help to defeat the object of his wrath. Instead, he continued to dismantle his adversary with his bare hands.

A low blow by Ambrose allowed the unstable Superstar to momentarily reinvigorate his own onslaught. But when he attempted to incorporate the chainsaw – given to him by none other than WWE Hall of Famer Terry Funk – Lesnar bulldozed him onto the ringside floor. Not to be denied, the tenacious Ambrose added a laptop and steel chair to his assault. In a stunning turnaround, however, Lesnar turned the tables yet again, and hit his eleventh German Suplex of the night from the top rope!

The wild-eyed Ambrose recovered and attacked Brock with everything he could get his hands on, spraying his ferocious foe in the eyes with a fire extinguisher before leaping from the top rope with a steel chair and landing directly onto The Conqueror.

Ambrose proceeded to throw numerous chairs into the ring, only to be treated to Suplex number 12 for his trouble. But when Brock went for his first F-5, Ambrose hit him with Dirty Deeds onto the chairs. The Lunatic Fringe then produced “Barbie” – a barbed wire-wrapped bat and gift from Hardcore Legend Mick Foley – though before he could use it, Brock countered once again, this time hurling Ambrose over the pile of chairs with his thirteenth Suplex. The thirteenth time was the harm for Ambrose, ultimately allowing Brock to finish off his opponent with an earth-shattering F-5 onto the steel mess for the victory.

Though Brock Lesnar left Dallas and the AT&T Stadium with the win, no one can dispute the unspeakable toughness of Dean Ambrose. Perhaps not even The Beast Incarnate. 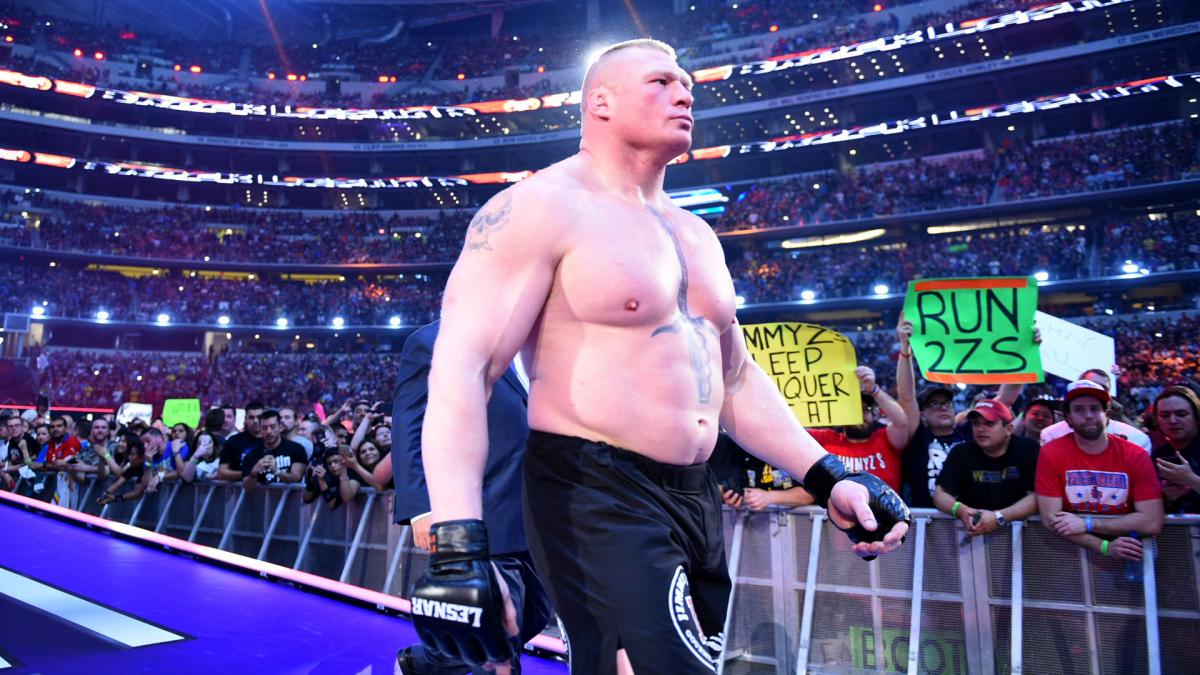 In this article:brock lesnar, wrestlemania