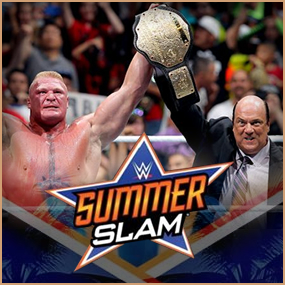 Paul Heyman’s Beast BROCK LESNAR Lived Up To The Hype By Smashing John Cena For The WWE World Heavyweight Championship in the Most One-Sided Ass-Kicking in Title History! 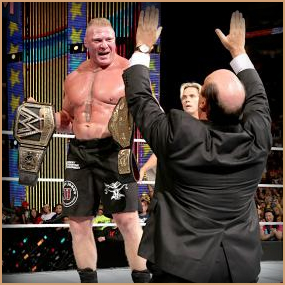 Paul Heyman’s Beast BROCK LESNAR Lived Up To The Hype By Smashing John Cena For The WWE World Heavyweight Championship in the Most One-Sided Ass-Kicking in Title History!

Wow. There’s no other way to describe the beating Brock Lesnar inflicted on John Cena at the 2014 edition of WWE SummerSlam.  According to WWE.com:

At a certain point during John Cena’s WWE World Heavyweight Championship defense against Brock Lesnar at SummerSlam 2014, members of the WWE Universe had to ask themselves, “When does a match stop being a match and start being a televised assault?”

How many bodyshots did The Beast Incarnate have to lay into Cena’s flesh before The Champ’s insides turned to porridge? How many German suplexes did Cena have to suffer before the referee called it off? How many times did Brock have to F-5 the Cenation leader before the man finally stayed down?

We learned the answers to those questions some 20 minutes into the most one-sided beating of Cena’s WWE career. Two F-5’s, countless punches thrown with bad intentions, and 16 — yes, 16 — German suplexes were rained down upon The Champ by the most dominant force WWE has ever seen before The Beast Incarnate accomplished what he returned to WWE to accomplish: Become the WWE World Heavyweight Champion.

If Cena had a game plan going into this defense, it was to get at Brock before Brock got at him. It took guts to charge at Lesnar the way the Cenation leader did at the opening bell, but what could he possibly do? Outwrestle a former NCCA Champion? Outpunch a former UFC Champion? Barely 30 seconds into the bout, Lesnar had battled Cena back and hit him with an F-5. Our hero managed to muscle out at two, but he was barely in the fight from there.

Of course, we’re HustleTweeting about WWE SummerSlam, and you’re more than welcome to join the conversation by following us on twitter HERE or write to us directly at hustleoncrave@gmail.com Hey, have you checked out the Hustle’s Ultra High Quality You Tube Channel, with exclusive videos featuring OUR WORLD EXCLUSIVE WITH MIKE TYSON … BROCK LESNAR’S “HERE COMES THE PAIN” … ICE-T AND COCO’s SEX SECRETS … MMA BAD BOY NICK DIAZ … the list goes on and on, so if you’re not subscribing, you’re missing something … and by the ways cheapos, it’s FREE! Yes, absolutely 100 percent FREE! What are you waiting for? Check it out HERE!

CLICK ON THE PICS BELOW TO SEE THE ENTIRE OFFICIAL
WWE PHOTO GALLERY FEATURING BROCK LESNAR’S DESTRUCTION OF JOHN CENA!