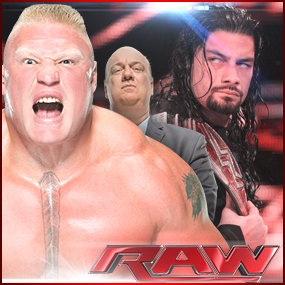 WWE Monday Night RAW concludes with an F5 on the World Champion as The McMahons and Paul Heyman look on from ringside!

So, Brock Lesnar decided to make a statement, and that statement was NO ONE IS SAFE as the stakes have never been higher in the annual WWE Royal Rumble. The championship is on the line, with WWE Chairman Vincent Kennedy McMahon forcing Roman Reigns to defend the title against 29 other competitors, one of whom will be Brock Lesnar … who doesn’t like to be lumped into groups. So as Reigns was fighting Kevin Owens (and several others) in a One vs All Match at the end of RAW, a new wrinkle was added … BRRRRRRRROCK LESNAR!

Of course, we’re HustleTweeting about WWE Royal Rumble, and you’re more than welcome to join the conversation by following the Hustle on Twitter HERE or write to us directly at hustleoncrave@gmail.com Hey, have you checked out the Hustle’s Ultra High Quality You Tube Channel, with exclusive videos featuring the #HUSTLEBOOTYTEMPTATS SUPERMODEL OF THE YEAR … OUR WORLD EXCLUSIVE WITH MIKE TYSON … BROCK LESNAR’S “HERE COMES THE PAIN” … ICE-T AND COCO’s SEX SECRETS … MMA BAD BOY NICK DIAZ … the list goes on and on, so if you’re not subscribing, you’re missing something … and by the ways cheapos, it’s FREE! Yes, absolutely 100 percent FREE! What are you waiting for? Check it out HERE!

CLICK ON THE PICS BELOW TO SEE THE OFFICIAL WWE PHOTO GALLERY FEATURING BROCK LESNAR, PAUL HEYMAN AND ROMAN REIGNS! 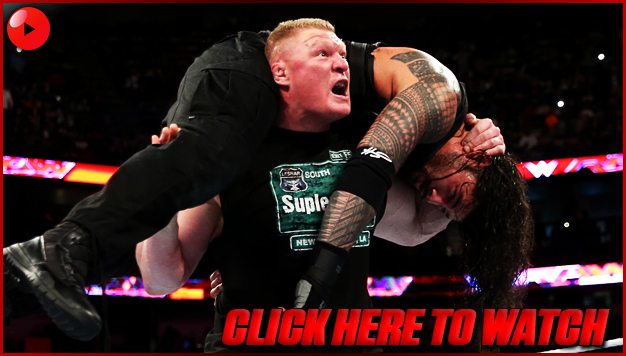