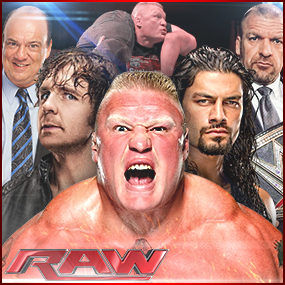 There is so much to cover, so let’s begin ….

Brock Lesnar had a busy night at WWE Monday Night RAW, which means there are those today nursing significant wounds. According to our friends at WWE.com:

Monday Night Raw kicked off in primo fashion, with Brock Lesnar and Paul Heyman stepping into the squared circle to declare their intentions of getting into the fast lane on The Road to WrestleMania. Lesnar’s advocate went so far as to create an eleventh Commandment ahead of his client’s battle with Roman Reigns and Dean Ambrose at WWE Fastlane: “Thou shalt not intentionally provoke The Beast!” However, if there’s a rule or edict made, Dean Ambrose will go out of his way to break it. The Intercontinental Champion strode to the ring and got right in The Beast Incarnate’s face. Ambrose said he wasn’t afraid of Lesnar, daring The Beast to take him to Suplex City, inviting Lesnar to inflict as much punishment as possible. The Lunatic Fringe brazenly stated that he would survive Lesnar’s worst at Fastlane and move onto WrestleMania and dethrone Triple H as World Heavyweight Champion. As Ambrose walked out of the ring, Lesnar and Heyman couldn’t help but smile, wondering if the Intercontinental Champion was as crazy as they say, or stupid enough to break their newly minted commandment.

It seems as though no one wanted to heed the commandment Paul Heyman created at the start of Raw. WWE World Heavyweight Champion Triple H entered Brock Lesnar’s locker room and questioned why The Beast didn’t slaughter Dean Ambrose for being so brazen earlier in the night. Lesnar shrugged off The Game’s taunting, remaining laser-focused on his one goal – recapturing the championship from The Game at WrestleMania.

Seeking to drive a wedge between the close friends ahead of the WWE Fastlane main event, Stephanie McMahon put Reigns and Ambrose into this battle with the WWE Tag Team Champions. The New Day took time before the Raw main event to call out The Rock after last week’s memorable encounter. Kofi Kingston, Big E and Xavier Woods promised that they would send a message to The Great One by leaving The Rock’s cousin and The Rock’s cousin’s best friend laying.Reigns and Ambrose did not take The New Day’s threat lightly. The brothers-in-arms brought the fight to the WWE Tag Team Champions, forcing them to scramble out of the ring as The Big Dog loaded up for the Superman Punch. The New Day’s numbers advantage eventually paid off, as Big E gained the upper hand on Reigns, slamming him into the ringside barricade. The wily Ambrose briefly took control of the bout, but Woods dropkicked him to keep The New Day on offense.The Lunatic Fringe finally tagged Reigns back in, sending The Big Dog on a tear through The New Day. Though Big E slammed him onto the announcer’s table, Reigns recovered to take out Kingston with a Superman Punch, leaving Ambrose to hit Dirty Deeds on Big E to earn the victory. There was no respite for the friends after the bell, as Brock Lesnar burst onto the scene. The distraction from The Beast allowed The New Day to blindside Ambrose and Reigns. The fray took Reigns out of the ring, leaving Ambrose alone in the ring with Lesnar. The Lunatic Fringe felt The Beast Incarnate’s fury, as he crashed into the canvas thanks to a devastating F-5. Ambrose may have been unafraid of Lesnar at the start of Raw, but he might think twice before invoking Brock Lesnar’s wrath again as WWE Fastlane draws near.

Of course, we’re HustleTweeting about WWE Monday Night Raw, and you’re more than welcome to join the conversation by following the Hustle on Twitter HERE or write to us directly at hustleoncrave@gmail.com. Hey, have you checked out the Hustle’s Ultra High Quality YouTube Channel, with exclusive videos featuring Backstage with Brock Lesnar and Paul Heyman… The Footage “They” Never Wanted You To See … UFC Bad Boy Nick Diaz’s Wildest Video Ever … Behind The Scenes at WrestleMania … ICE-T and Coco’s Sex Secrets … the list goes on and on, so if you’re not subscribing, you’re missing something … and by the ways cheapos, it’s FREE! Yes, absolutely 100 percent FREE! What are you waiting for? Check it out HERE! 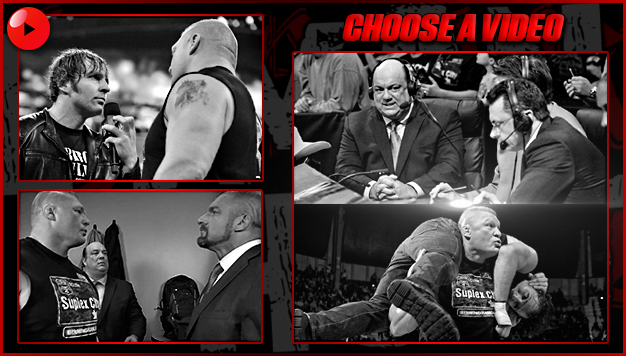