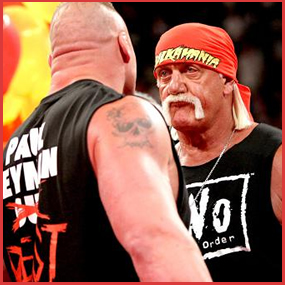 Six Days Before SummerSlam … After Paul Heyman RAPS … After John Cena’s Rebuttal … It All Comes To a Head at the End of the Show!

Hulk Hogan was thrown a birthday celebration by World Wrestling Entertainment, but it only served to be an opportunity for BROCK LESNAR and our very own Hustler De Tuti Hustlers Paul Heyman to play mind games with WWE World Heavyweight Champion John Cena. According to WWE.com:

Happy birthday … BROTHER! The WWE Universe was promised a birthday blowout, and a birthday blowout they got when Hulk Hogan celebrated alongside a cavalcade of WWE Legends who paid homage to The Immortal One. Among the dignitaries were “Mean” Gene Okerlund, Jimmy Hart, Ric Flair, “Rowdy” Roddy Piper, Paul Orndorff – yep, “Mr. Wonderful” himself – and the original members of the nWo. Hogan even broke out his old black-and-white duds for the occasion.

That said, there was a little hiccup before The Hulkster could dig into a birthday pizza celebration. Having no desire to let Hogan hang and bang with his fellow Legends, Paul Heyman and Brock Lesnar played party crashers and for a moment it looked like The Beast Incarnate would make mincemeat of Hogan. John Cena made his entrance at the 11th hour to save the celebration, and Lesnar made his exit at Heyman’s insistence. Whatever beating lies in store, it will wait six more days.

Of course, we’re HustleTweeting about WWE SummerSlam, and you’re more than welcome to join the conversation by following us on twitter HERE or write to us directly at hustleoncrave@gmail.com Hey, have you checked out the Hustle’s Ultra High Quality You Tube Channel, with exclusive videos featuring OUR WORLD EXCLUSIVE WITH MIKE TYSON … BROCK LESNAR’S “HERE COMES THE PAIN” … ICE-T AND COCO’s SEX SECRETS … MMA BAD BOY NICK DIAZ … the list goes on and on, so if you’re not subscribing, you’re missing something … and by the ways cheapos, it’s FREE! Yes, absolutely 100 percent FREE! What are you waiting for? Check it out HERE!

CLICK ON THE PICS BELOW TO SEE THE ENTIRE OFFICIAL WWE
PHOTO GALLERY FEATURING HULK HOGAN’S BIRTHDAY CELEBRATION ON RAW! 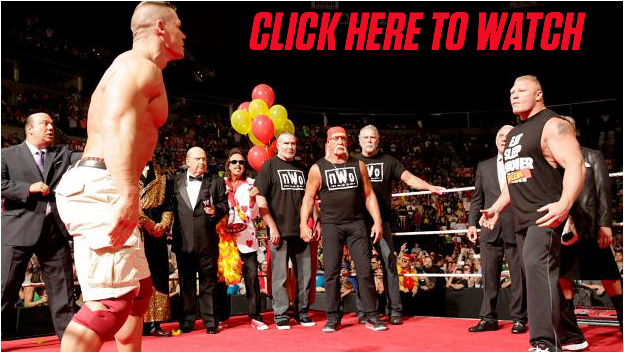