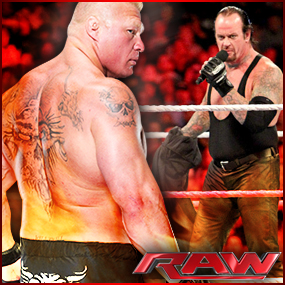 Stone Cold Steve Austin Introduces The Undertaker … who is interrupted by The Beast Incarnate and Paul Heyman!

Brock Lesnar and The Undertaker under the same roof? That’ll put butts in the seats — or, if it’s anything like last time, clear out the benches for an all-out clash. As it turned out, though, the last face-to-face confrontation between Conqueror and Conquered was low on fisticuffs but high on intensity. After being heralded by none other than “Stone Cold” Steve Austin, Undertaker stalked to the ring with an ominous message for The Beast, who soon made an appearance to take exception. The Phenom invited Lesnar into the ring to skip ahead to their “Final Chapter” a few days early, but Paul Heyman’s pleas eventually provoked The One in 22-1 to stay put.

Of course, we’re HustleTweeting about WWE Monday Night RAW, and you’re more than welcome to join by following the Hustle on Twitter HERE or write to us directly at hustleoncrave@gmail.com Hey, have you checked out the Hustle’s Ultra High Quality You Tube Channel, with exclusive videos featuring the #HUSTLEBOOTYTEMPTATS SUPERMODEL OF THE YEAR … OUR WORLD EXCLUSIVE WITH MIKE TYSON … BROCK LESNAR’S “HERE COMES THE PAIN” … ICE-T AND COCO’s SEX SECRETS … MMA BAD BOY NICK DIAZ … the list goes on and on, so if you’re not subscribing, you’re missing something … and by the ways cheapos, it’s FREE! Yes, absolutely 100 percent FREE! What are you waiting for? Check it out HERE!

CLICK ON THE PICS BELOW TO SEE THE ENTIRE OFFICIAL WWE PHOTO GALLERY FEATURING STONE COLD, UNDERTAKER, BROCK AND HEYMAN! 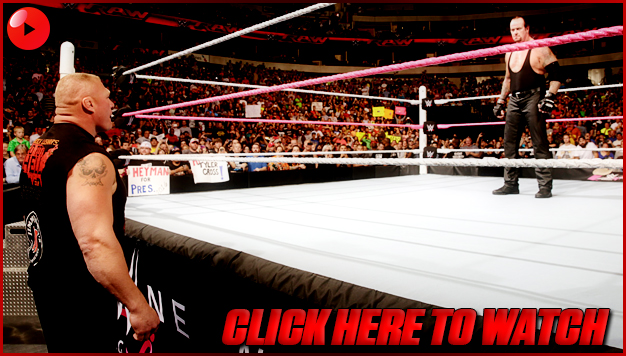