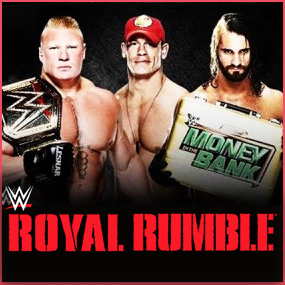 Our very own Hustler De Tuti Hustlers Paul Heyman calls the Triple Threat a potential Double Cross, and all Hell Breaks Loose as John Cena, Brock Lesnar and Seth Rollins sign for the main event in less than two weeks!

Seth Rollins has done it again. He’s curb-stomped Brock Lesnar. And with only one more episode of WWE Monday Night RAW separately this moment and The Royal Rumble, the tensions are getting higher and higher for the Triple Threat Match for the Undisputed WWE World Heavyweight Championship at the Rumble. According to WWE.com:

Time to cross the T’s, dot the I’s and, well, stomp the heads. What was surely arranged to be a civil contract signing between WWE World Heavyweight Champion Brock Lesnar and his two No. 1 contenders turned into an all-out car wreck when Seth Rollins seized the opportunity to humiliate both John Cena and The Beast Incarnate as only Seth Rollins can. This came after Paul Heyman gave his second address of the night, following his “return to the scene of the crime” by promising the destruction of anyone who stepped into Lesnar’s path.

As tensions escalated between Heyman’s camp and The Authority, Cena muscled his way into the fray and provoked Rollins to attack him with the Money in the Bank briefcase. What ensued was a quick, brutal flurry of physicality. Lesnar German suplexed Cena and Rollins clean into the air; Cena countered with an AA to Lesnar through the table and then Rollins provided the two cherries on top by Curb Stomping both Lesnar and Cena to end the show — and, potentially, The Beast’s title reign — on his own terms. Perhaps next week’s Raw Reunion, featuring Ric Flair, Shawn Michaels, Scott Hall and Hulk Hogan, will provide further insight as to Mr. Money in the Bank’s plans.

Of course, we’re HustleTweeting about Brock vs Cena vs Rollins, and you’re more than welcome to join the conversation by following the Hustle on Twitter HERE or write to us directly at hustleoncrave@gmail.com Hey, have you checked out the Hustle’s Ultra High Quality You Tube Channel, with exclusive videos featuring OUR WORLD EXCLUSIVE WITH MIKE TYSON … BROCK LESNAR’S “HERE COMES THE PAIN” … ICE-T AND COCO’s SEX SECRETS … MMA BAD BOY NICK DIAZ … the list goes on and on, so if you’re not subscribing, you’re missing something … and by the ways cheapos, it’s FREE! Yes, absolutely 100 percent FREE! What are you waiting for? Check it out HERE! 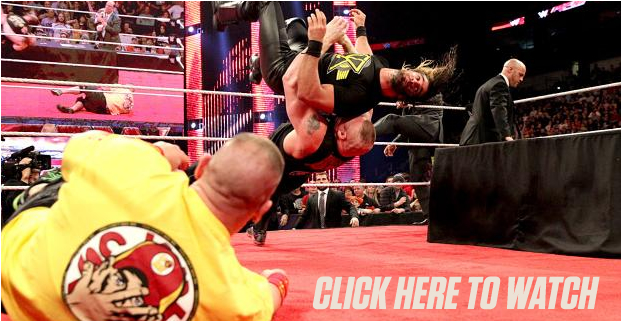