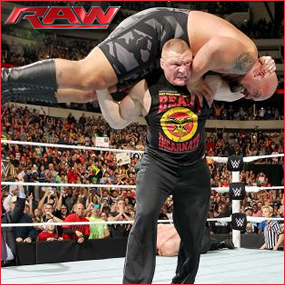 Well, it’s going to be a very interesting night in Philadelphia (of all cities) this Sunday, isn’t it?

The WWE Universe’s support landed John Cena in what ended up being a 3-on-1 Handicap Match against Seth Rollins, Kane & Big Show, and with his buddies’ jobs on the line, Team Cena’s guardian angel came through once again. Good thing, too, because up until that point, the bout hadn’t been so much a wrestling match as a public beating, dished out at great leisure by The Authority, which took no small amount of pleasure in humiliating the 15-time World Champion in his darkest hour.

After a spear from Big Show and a Chokeslam from Kane left Cena down, an image of Sting appeared on the TitanTron just as Seth Rollins was about to put his foe away with a Curb Stomp. What was seemingly a still image of the former WCW Champion turned out to be a live shot of the vigilante himself, who stalked to the top of the Raw ramp for the first time ever and distracted Rollins enough for Cena to steal the win with a roll-up and reinstate Dolph Ziggler, Ryback & Erick Rowan on the spot. Triple H’s irate demands for Sting to present himself again were instead answered by Brock Lesnar, who summarily laid waste to Kane and Big Show, though Rollins got away. This Sunday, he might not be so lucky.

Of course, we’re HustleTweeting about The WWE Royal Rumble pay per view from Philadelphia, and you’re more than welcome to join the conversation by following the Hustle on Twitter HERE or write to us directly at hustleoncrave@gmail.com Hey, have you checked out the Hustle’s Ultra High Quality You Tube Channel, with exclusive videos featuring OUR WORLD EXCLUSIVE WITH MIKE TYSON … BROCK LESNAR’S “HERE COMES THE PAIN” … ICE-T AND COCO’s SEX SECRETS … MMA BAD BOY NICK DIAZ … the list goes on and on, so if you’re not subscribing, you’re missing something … and by the ways cheapos, it’s FREE! Yes, absolutely 100 percent FREE! What are you waiting for? Check it out HERE!

CLICK ON THE PICS BELOW TO SEE THE ENTIRE OFFICIAL
WWE PHOTO GALLERY FEATURING THE WILD ENDING TO MONDAY NIGHT RAW! 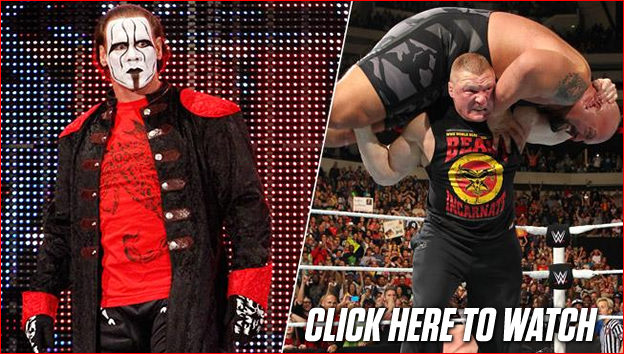