Brock Lesnar vs Dean Ambrose Explodes Before ... and During ...WWE Monday Night RAW 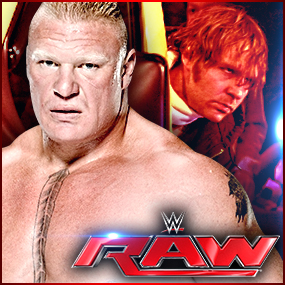 Brock Lesnar sent Dean Ambrose to the hospital based on The Lunatic Fringe‘s attack with a steel chair at WWE FAST LANE. So once RAW went on the air, it was already a big news day. Then Paul Heyman came out to the ring with Brock. And then Ambrose returned from the hospital. Never a dull moment, as covered by WWE.com:

Among the many takeaways from WWE Fastlane’s main event was that, if not for Dean Ambrose and a steel chair to the back, Brock Lesnar may well be headed to WrestleMania instead of Roman Reigns. The Conqueror does not take losing lightly; hence his barbaric sneak attack of The Lunatic Fringe in the Joe Louis Arena parking lot before Raw. But what Lesnar fails to grasp is that Dean Ambrose is so tough that he may well outlive both cockroaches and the Twinkie.

Following Heyman’s demand that a new WrestleMania opponent present himself to The Beast, the punch-drunk Lunatic Fringe somehow managed to commandeer an ambulance and crawl his way back to Raw to confront Lesnar and challenge him to a No Holds Barred Match at The Show of Shows. Not only did Lesnar accept, but he also gave Ambrose a free sneak preview by F-5ing him onto the arena floor. Rough start on The Road to WrestleMania, but rest assured, Ambrose will be back for more.

CLICK ON THE PICS BELOW TO SEE THE OFFICIAL WWE PHOTO GALLERY FEATURING BROCK LESNAR, PAUL HEYMAN AND DEAN AMBROSE! 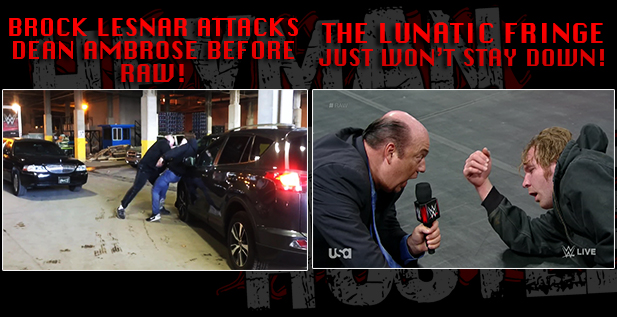 In this article:brock lesnar, Dean Ambrose