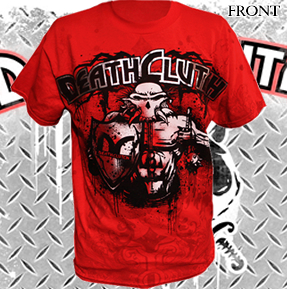 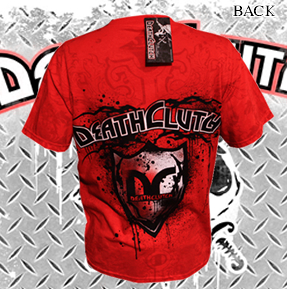 Death Clutch has released the Official Brock Lesnar UFC 116 Walkout T-Shirt. The current UFC Heavyweight Champion’s very own clothing line designed a black and red shirt, which is what Lesnar will wear out to the Octagon this Saturday night, July 3rd at the MGM Grand Arena in the main event of the biggest pay per view of the year, UFC 116.

This Saturday night’s UFC 116 mega-event from the MGM Grand Garden Arena in Las Vegas. Nevada promises to be the biggest pay per view event of 2010. The reigning UFC Heavyweight Champion Brock Lesnar will fight the 12-0 undefeated Interim Champion Shane Carwin, with the winner being crowned the Undisputed Heavyweight Champion of the World. THE HEYMAN HUSTLE is covering the event from all angles, an unprecedented 360 full spectrum coverage of the event that has Sin City buzzing like no other. You can check out our exclusive UFC 116 section HERE

CLICK ON THE PHOTOS BELOW TO SEE BROCK LESNAR
TRAINING FOR UFC 116 AT THE DEATH CLUTCH GYM!