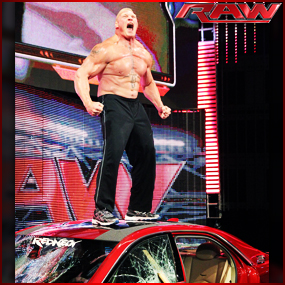 Sometimes, it’s the little things in life that bring you the most pleasure. Paul Heyman’s Beast Brock Lesnar Took a Freakin’ Cadillac to Suplex City!

Um. Hi Ladies and Gentlemen. We reported earlier that BROCK LESNAR AND PAUL HEYMAN OPENED THIS WEEK’S EDITION OF WWE MONDAY NIGHT RAW IN CHICAGO. Well, we also told you it was all going to hit the fan. And just so you know, it did. In a big way. We’ll let WWE.com tell you the story:

Despite the best efforts of Brock Lesnar, Seth Rollins managed to escape the Second City without a scratch to his name. J&J Security? Not so lucky. Despite encouragement from Triple H, Joey Mercury and Jamie Noble were the proverbial lambs that The Beast Incarnate feasted upon when Lesnar stormed a trash-talking Rollins in the ring. Given that J&J both sported ax handles as equalizers, Lesnar tore J&J’s beloved Cadillac apart with axes of his own to lure J&J out of the ring. He followed with a beating on the overmatched enforcers that put his decimation of Kofi Kingston to shame.

Not only did The Anomaly shatter Jamie Noble’s arm in the Kimura Lock, but he also inducted Mercury into Suplex City by belly-to-bellying the former Tag Team Champion through the windshield of the Caddy. Rollins, meanwhile, got out of dodge while the getting was good, fleeing Lesnar through the crowd and taking the stairs two at a time to the safety of the concourse. The horror. The horror.

CLICK ON THE PICS BELOW TO SEE THE ENTIRE OFFICIAL
WWE PHOTO GALLERY FEATURING BROCK LESNAR, PAUL HEYMAN AND THE VEHICLE-LESS AUTHORITY! 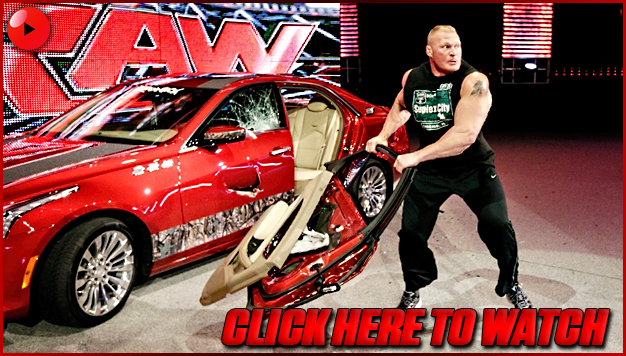