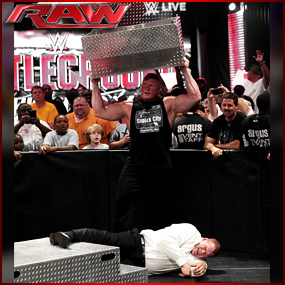 Tonight, on the final WWE Monday Night Raw before WWE Battleground, The Beast Incarnate Brock Lesnar finally got his hands on WWE Champion, Seth Rollins, all due to a simple flaw in Rollins’ well-thought-out plan … not being quick enough.

One ax handle, one overturned table and one broken ankle later, and Seth Rollins is officially set to defend his WWE World Heavyweight Championship against Brock Lesnar at WWE Battleground. Despite the insistence of Kane that a plan was in play to weaken The Beast before Battleground, the contract signing quickly turned into a one-man demolition spree once pen had been put to paper.

Not only did Lesnar flip the aforementioned table in Rollins’ face, but Kane, who’d stood tough against Heyman’s slandering of his brother and an increasingly hostile Rollins all night, also suffered the broken ankle. The injury came after Kane’s master plan — an ax handle stored under the contract table — failed to pan out and his gritty efforts to fend Lesnar off were eventually thwarted by The Beast Incarnate and a set of steel steps. Further ignominy followed when a frustrated Rollins insulted Kane and stomped on his ruined ankle, pausing only to promise, once again, that he’d slay The Beast at Battleground. Partially because of adrenaline, sure, but at this point, it’s fair to say Rollins has nothing left to lose. 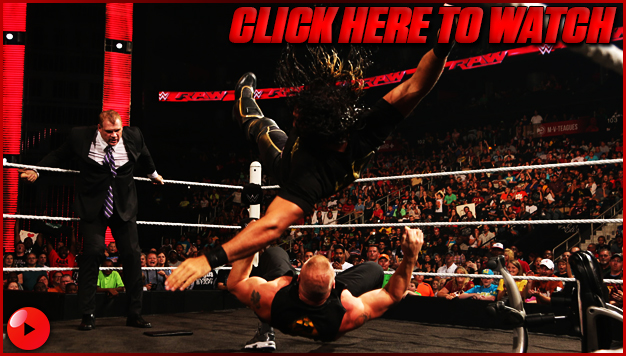