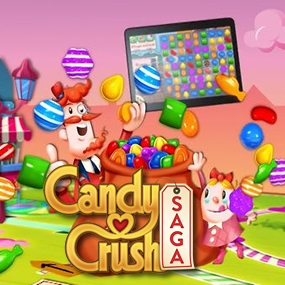 The game’s manufacturer files for a staggering IPO!

King Digital Entertainment, the maker of the uber-popular “Candy Crush Saga” online game has filed for an IPO of up to $500 million on the New York Stock Exchange, the company said in an SEC filing today. The company did not detail the number of shares it plans to list or the price range for the offering but revealed that it intends to apply to list under the stock symbol “KING” … and while the news is not exactly unexpected, it still made major headlines this afternoon, as “Candy Crush Saga” is one of the most frequently downloaded free apps via iPhone and Google Play. In the company filing, King said it believes “Candy Crush Saga” is “one of the largest interactive entertainment franchises of all time.”

CLICK HERE TO SEE THE OFFICIAL F-1 FORM REGISTRATION BY THE MAKERS OF CANDY CRUSH!

The company also noted that in December, an average of 128 million daily active users played its games more than 1.2 billion times per day. As of the end of last year, King had 324 million monthly unique users and a track record of long-term retention, it said in Tuesday’s filing. A number of Hollywood stars are fans of the game,  with Adam Levine, Jesse Tyler Ferguson, Rashida Jones, Emmy Rossum and Emma Roberts all talking (or tweeting) about playing the game.

According to the filing, King intends to allow some of its shareholders to sell into the IPO. Roughly half of company is owned by private-equity firm Apax Partners, with 10 percent owned by co-founder and CEO Riccardo Zacconi. Another 8 percent is owned by venture-capital firm Index Ventures. King will likely face questions as it prepares for its IPO about what differentiates it from mobile game developer Zynga, shares of which have fallen more than 50 percent since its 2011 IPO.

King did pick different banks than Zynga to underwrite its IPO: JPMorgan, Credit Suisse and Bank of America Merrill Lynch took top roles for King. Zynga’s IPO was underwritten by Morgan Stanley and Goldman Sachs in the lead spots. According to a confirmed report in The Wall Street Journal, King’s paperwork comes after it filed confidentially with the SEC for an offering last summer.

So … what do you think about the “Candy Crush Saga” IPO? We’re HustleTweeting about it right now, and you’re more than welcome to join the conversation by following THE HEYMAN HUSTLE on Twitter HERE or write to us directly at hustleoncrave@gmail.com  Hey, have you checked out the Hustle’s Ultra High Quality You Tube Channel, with exclusive videos featuring OUR WORLD EXCLUSIVE WITH MIKE TYSON … BROCK LESNAR’S “HERE COMES THE PAIN” … ICE-T AND COCO’s SEX SECRETS … MMA BAD BOY NICK DIAZ … the list goes on and on, so if you’re not subscribing, you’re missing something … and by the ways cheapos, it’s FREE! Yes, absolutely 100 percent FREE! What are you waiting for? Check it out HERE!