Catching Up With Former WWE Diva Lita aka Amy Dumas of The Luchagors! 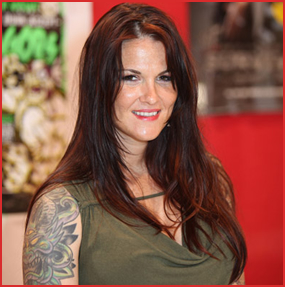 She went from being the toenail-biting "Miss Congeniality" in the Original ECW to the darling, daring femme fatale who ran with The Hardy Boyz at the height of their WWE popularity. After her real-life breakup with Matt Hardy, she became the best female villain in WWE, creating a duo with Adam "Edge" Copeland that could only be compared to the Shawn Michaels/Sherri Martel combination in terms of crowd heat and box office. Amy Dumas, who left WWE after her contract expired, was known as "Lita," and she now tours the world with her band, The Luchagores. The sultry former WWE Womens’ Champion made a rare autograph appearance at the Detroit Comic-Con, and looks absolutely fantastic!

IT’S THE WEEKEND EDITION OF THE HOLLYWOOD CHARLIE
MEDIA WATCH, PRESENTED TODAY IN SPECTACULAR 2010
HUSTLEVISION. OUR TALENTED STAFF OF UNDERPAID YET
OVERWORKED TRAINED MONKEYS HAVE PERFORMED AS
IF THEY WERE SLAVE LABORERS (AS IF?, AND COMPILED
THE VERY BEST OF THE WEB. JUST PICK A PIC AND CLICK!