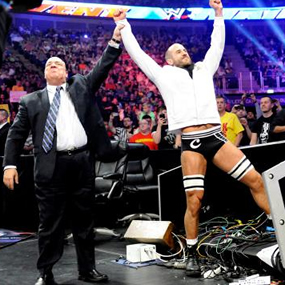 WWE Main Event features the newest Paul Heyman Guy versus The World’s Strongest Athlete in a true test of strength!

When our very own Hustler De Tuti Hustlers Paul Heyman goaded Mark Henry into an Arm Wrestling Contest against Swiss Superman Cesaro, we should have known our boss had something up his sleeve. He did. A devious plan! According to WWE.com:

Before the battle to prove who indeed is the world’s strongest athlete commenced, Paul Heyman addressed Mark Henry and reminded The World’s Strongest Man that Cesaro already defeated him in the Intercontinental Championship #1 Contender Tournament. Instead of a match, Heyman suggested an arm-wrestling contest, which Henry readily accepted.

Creating a makeshift arm wrestling table at  the announce position, Henry locked hands with The Swiss Superman and prepared to display his world renouned strength. Distracted by Paul Heyman, Mark Henry was met by a leaping punch from Cesaro that sent The World’s Strongest Man tumbling to the floor. The King of Swing then flipped the announce table on top of Henry before Heyman declared his client “The World’s Strongest Athlete” to conclude WWE Main Event from London.

Of course, we’re HustleTweeting about WWE Main Event, and you’re more than welcome to join the conversation by writing us on twitter HERE or write to us directly at hustleoncrave@gmail.com Hey, have you checked out the Hustle’s Ultra High Quality You Tube Channel, with exclusive videos featuring OUR WORLD EXCLUSIVE WITH MIKE TYSON … BROCK LESNAR’S “HERE COMES THE PAIN” … ICE-T AND COCO’s SEX SECRETS … MMA BAD BOY NICK DIAZ … the list goes on and on, so if you’re not subscribing, you’re missing something … and by the ways cheapos, it’s FREE! Yes, absolutely 100 percent FREE! What are you waiting for? Check it out HERE!

HIGHLIGHTS OF CESARO VS MARK HENRY IN AN ARM WRESTLING CONTEST! 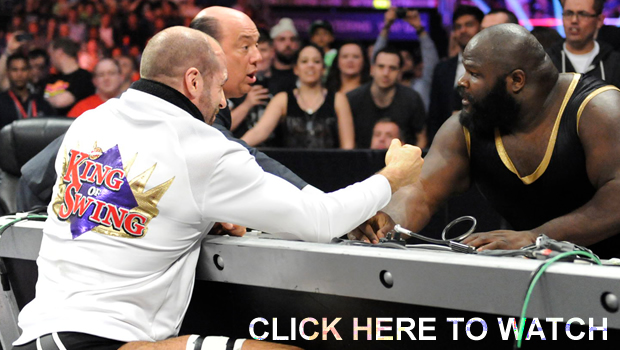