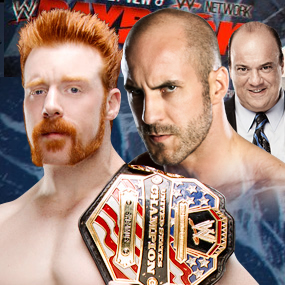 Our very own Hustler De Tuti Hustlers is furious as the United States Champion uses a small package to defeat The Swiss Superman during their fight in Chicago!

Cesaro and Sheamus came to Chicago to fight, but it was an old school wrestling roll up that determined the decision in their contest. And Paul Heyman is none too happy about it! According to WWE.com:

CHICAGO — Let’s hear it for the melting pot that is the US of A. Where else could you find a Swiss strongman slugging it out with a Dublin pub brawler over a championship emblazoned with that tricolored symbol of manifest destiny that is the American flag?

That was most definitely the scene in Chicago’s Allstate Arena, where Ireland’s Sheamus successfully defended his United States Title against Switzerland’s Cesaro in the type of straight-up slugfest that transcends race, color and creed. Even the Second City faithful — not easily impressed by alpha male posturing after a lifetime of watching Monsters of the Midway like Dick Butkus and Steve “Mongo” McMichael — had to tip their Bears hats to the poetic brutality of this scrum.

It’s not that anyone wasn’t expecting a fight out of Sheamus and Cesaro — these hombres weren’t going to dance the Hoochie Koo — it’s just that the fight they got resembled something different altogether. You know when you’re a kid and you play with your action figures by smashing them together with no concern for resale value? That’s what this match actually looked like.

At the first sound of the bell, Sheamus barraged Cesaro with kicks and punches before The King of Swing snagged him in a headlock and yoked him into the air with animal strength. Still, if anyone had the advantage in the early goings, it was the defending champion. By the way he pounded on Cesaro’s chest with the Beats of the Bodhran, it seemed like this thing might be all Sheamus.

That was until The Celtic Warrior propelled himself into the ring from the apron and delivered his chin directly into Cesaro’s elbow. The hits kept coming from there, but what made the Swiss Superman’s performance so captivating was what he did in between the power moves. At one point, Cesaro grabbed Sheamus’ face with both hands and dug his fingers into the Irishman’s eye sockets. Later, when both men were exhausted and on their knees, Cesaro slapped Sheamus across the face so many times the audience lost count.

Frustration seemed to set in for The Celtic Warrior when he climbed to the second turnbuckle and dropped a knee on his opponent three consecutive times. When Cesaro recovered from that — and powered out of a Cloverleaf attempt — Sheamus seemed to suddenly figure out that brute force wasn’t going to beat this guy.

While Cesaro continued to dig into his arsenal — breaking out the rarely seen Alpamare Waterslide and a Cesaro Swing with so many rotations you half-expected Sheamus to puke up a pint in the center of the ring — The Celtic Warrior waited for an opening. He found it the moment Cesaro released him from the Swing as he rolled up the challenger for a quick 1-2-3 — an unexpected, but effective ending to a televised mugging.

So, yeah, the guys fighting over the U.S. Title may have been très European, but they made no bones about beating the tar out of each other for the honor of being called the best, and damned if that ain’t the American way. As for that melting pot? It is currently being glued back together after Sheamus and Cesaro stomped it to bits.

Of course, we’re HustleTweeting about WWE Payback, and you’re more than welcome to join the conversation by writing us on twitter HERE or write to us directly at hustleoncrave@gmail.com Hey, have you checked out the Hustle’s Ultra High Quality You Tube Channel, with exclusive videos featuring OUR WORLD EXCLUSIVE WITH MIKE TYSON … BROCK LESNAR’S “HERE COMES THE PAIN” … ICE-T AND COCO’s SEX SECRETS … MMA BAD BOY NICK DIAZ … the list goes on and on, so if you’re not subscribing, you’re missing something … and by the ways cheapos, it’s FREE! Yes, absolutely 100 percent FREE! What are you waiting for? Check it out HERE!

CLICK ON THE PICS BELOW TO SEE THE ENTIRE OFFICIAL PHOTO GALLERY!