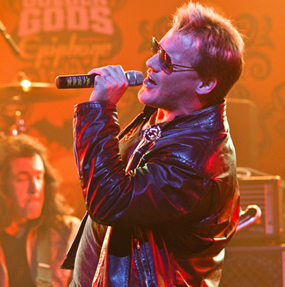 The Former WWE Undisputed Heavyweight Champion of the World is Not Content with A Best Selling Book and Dancing With The Stars … He Craves The Stage!

Chris Jericho and his band Fozzy took over the Revolver Golden Gods Awards, and when the special airs on VH-1, we’re wondering if anyone can follow Jericho’s show open.
Dave Grohl started the night by coming out on stage and hitting "play" on the boombox, which played a song by, of all people, Justin Bieber. Jericho then comes out and smashes the boombox with a baseball bat.

Fozzy then opens the show with a metal medley consisting of "Children of the Grave" by Black Sabbath, "Stand Up and Shout" by Dio, "Wraithchild" by Iron Maiden, "Angel of Death" by Slayer, "No More Tears" by Ozzy, "For Whom the Bell Tolls" by Metallica, "Freewheel Burning" by Judas Priest and "Primal Concrete Sledge" by Pantera. Jericho and his boys then hit a  Fozzy original, "God Pounds His Nail!"

Of course, we’re HustleTweeting about Chris Jericho and Fozzy, and you’re more than welcome to join the conversation by following THE HEYMAN HUSTLE on Twitter HERE or write to us at hustleoncrave@gmail.com

CLICK ON THE PICS BELOW TO BREAK THE WALLS DOWN!