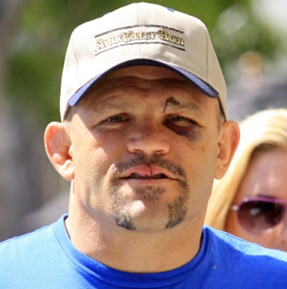 Chuck Liddell has made his 1st public appearance since being knocked out by Rich Franklin in what was no doubt Chuck’s final UFC fight ever. The Iceman took his beautiful blonde girlfriend and his son out for a stroll in Beverly Hills, and the wounds of the 1st round KO at the hands of Franklin were still rather fresh on Chuck’s face. Never one to hide his battle scars, Chuck walked proudly through the streets of Beverly Hills’ swankiest shopping area, taking some time off before going to Vegas for UFC 116, where UFC Heavyweight Champion Brock Lesnar will fight Interim Champion Shane Carwin for the Undisputed Heavyweight Championship of the World. You can check out our own Hustler De Tuti Hustlers Paul Heyman’s preview of the Lesnar-Carwin showdown HERE, and you can see more of Chuck’s first day in public since UFC 115 below.

CLICK ON THE PHOTOS BELOW TO SEE THE ENTIRE
GALLERY OF CHUCK LIDDELL’S 1st PUBLIC APPEARANCE
SINCE HIS LOSS TO RICH FRANKLIN AT UFC 115!