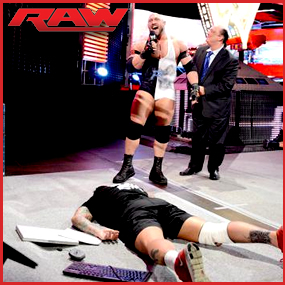 WWE Monday Night RAW features our very own Hustler De Tuti Hustler Paul Heyman in a scooter … and a trap for the hometown hero from the Second City!

CM Punk was attacked by Ryback and Intercontinental Champion Curtis Axel in a trap that was sprung into action during Punk’s triumphant return to Chicago despite the fact PAUL HEYMAN PINNED PUNK AT WWE NIGHT OF CHAMPIONS! It was a hot night in September in the Windy City, as WWE.com reports:

CM Punk has come home to Chicago, Blackhawks jersey and all, and he’s got a few things on his mind. In his first appearance since being pinned by Paul Heyman at Night of Champions, a visibly happy-to-be-home Second City Saint addressed his hometown with a twofold apology: First, for failing to bring the Stanley Cup to Raw, and second, for failing to make good on his promise to annihilate the mad scientist eight days earlier. While Punk vowed to channel his beloved ‘Hawks and bounce back from his slump, Heyman ruined the moment by rolling out on a scooter to goad the “Second Best in the World” into a frenzy. The ECW mastermind’s escape plan hit a snag when his wheels broke down, but before Punk could reach his target, he was intercepted by Curtis Axel and Ryback, who brought the hometown hero’s night to an ugly ending by putting him through a table at ringside.

Of course, we’re HustleTweeting about Paul Heyman’s trap for CM Punk in Chicago, and you’re more than welcome to join our HustleTweeters on Twitter. All you have to do is follow THE HEYMAN HUSTLE on the soon-to-be-publicly-traded Twitter HERE or write us directly at hustleoncrave@gmail.com  Hey, have you checked out the Hustle’s Ultra High Quality You Tube Channel, with exclusive videos featuring OUR WORLD EXCLUSIVE WITH MIKE TYSON … BROCK LESNAR’S “HERE COMES THE PAIN” … ICE-T AND COCO’s SEX SECRETS … TEEN SENSATION TAYLOR MOMSEN … UFC BAD BOY NICK DIAZ … THE WALKING RIOT MISSY HYATT if you’re not subscribing, you’re missing something … and by the ways cheapos, it’s FREE! Yes, absolutely 100 percent FREE! What are you waiting for? Check it out HERE!

CLICK ON THE PICS BELOW TO SEE THE ENTIRE OFFICIAL WWE GALLERY
FEATURING CM PUNK’S RETURN TO CHICAGO … AND PAUL HEYMAN’S TRAP! 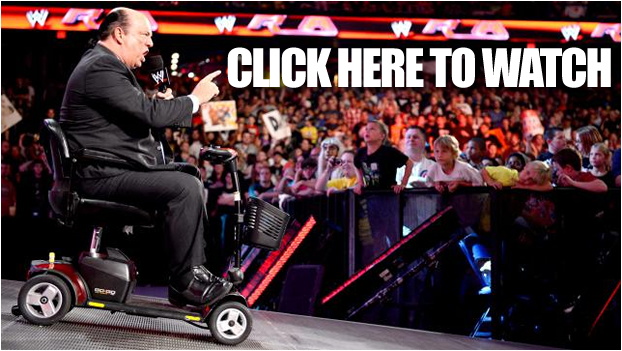