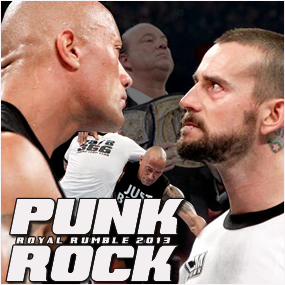 The undisputed reigning defending WWE Champion closes out 2013’s very first episode of Monday Night RAW by calling out … and going face-to-face … with The Great One!

The main event for The Royal Rumble has been set. CM Punk will defend the WWE Title against The Rock live on pay per view on Sunday night, January 27th. The current undisputed reigning defending WWE Champion and the action adventure movie star are set for a main event title match that will go down in history.

Finally, it’s come down to this: WWE Champion CM Punk and The Rock, in the ring one-on-one. And while the first 2013 encounter between the two (and their first faceoff since Raw 1,000 back in July) was only a verbal one, the atmosphere was still pulsating with electricity and animosity as their WWE Title bout at the Royal Rumble drew ever nearer. Before The Rock could address the people, however, CM Punk took the opportunity to drop another “pipe bomb.” In his own words, the term has been misinterpreted since that fateful 2011 night in Las Vegas. “Pipe bomb” has taken on the meaning of a tell-all missive, but to the champion, it is simply the truth. And the truth is, despite his efforts, Punk found that life in WWE had not changed much, and claimed that talented Superstars such as himself were still subject to the whims of an audience he believed to be fickle and ill-informed. In that vein, Punk snarled that he did not succeed because of “the people” who suddenly rallied to his side: He succeeded despite the “system” that had been established to keep him and his ilk down, and the fans who supported it in the first place.

“I have beaten you,” Punk said to the Universe, the establishment, to anyone and everyone his words could reach. “I have stomped you out under my oppressive boot and I’m gonna do the same to The Rock because I don’t care if he’s back. You do not get to win.”

At that point, The Rock had enough. The Brahma Bull’s music hit and for the first time since July, The Great One stalked down to the ring and wasted little time in addressing the champion’s comments. “Twenty days,” The Rock said, addressing the number of days Punk has until the fateful WWE Title Match between the two at the Royal Rumble. “Twenty days. Time’s up.”

Punk countered with a response that had no shortage of malice, but The Great One would not be deterred. “Twenty days,” Rock warned again. “Time’s up.” And before Punk could reply, The Brahma Bull struck with a Rock Bottom, leaving the WWE Champion in a heap on the canvas and sending an unmistakable message to The Straight Edge Superstar.

Welcome to 2013, WWE Universe. It’s gonna be quite the year. Twenty days.

Of course, we’re HustleTweeting about CM Punk vs The Rock, and you’re more than welcome to join the conversation by join the conversation by following us on twitter HERE or write us directly at hustleoncrave@gmail.com  Hey, have you checked out the Hustle’s Ultra High Quality You Tube Channel, with exclusive videos featuring OUR WORLD EXCLUSIVE WITH MIKE TYSON … BROCK LESNAR’S “HERE COMES THE PAIN” … ICE-T AND COCO’s SEX SECRETS … TEEN SENSATION TAYLOR MOMSEN … UFC BAD BOY NICK DIAZ … THE WALKING RIOT MISSY HYATT if you’re not subscribing, you’re missing something … and by the ways cheapos, it’s FREE! Yes, absolutely 100 percent FREE! What are you waiting for? Check it out HERE!

CLICK ON THE PICS BELOW TO SEE THE ENTIRE OFFICIAL WWE GALLERY
FEATURING CM PUNK’s HISTORIC FACE-TO-FACE WITH THE ROCK ON RAW! 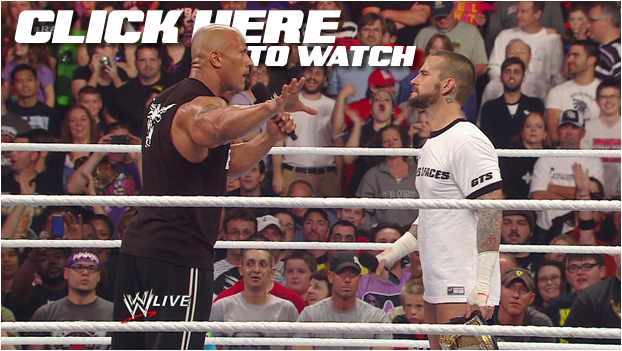