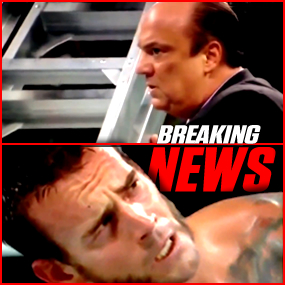 Even the #EXTREME faithful in Philadelphia are left in shocked horror as our very own Hustler De Tuti Hustlers does the unthinkable to The Best in the World!

There are few moments that end up being darker than your worst nightmare scenario, but for The Best in the World CM Punk, what happened tonight in Philadelphia is something he will never forget for the rest of his life … and that’s exactly how our very own Hustler De Tuti Hustlers Paul Heyman wants it!

PHILADELPHIA — The history of the Money in the Bank Ladder Match is one marked by reckless abandon, endless fortitude and more than a little bit of luck, but it was betrayal that defined the Money in the Bank “All-Stars” Match. With CM Punk a tattooed hand away from gripping a record third briefcase, the slimy Paul Heyman entered the fray and repeatedly bashed his supposed best friend — his “guy” — with a steel ladder. The brazen assault nullified The Straight Edge Superstar, giving Randy Orton the opportunity to capture his first Money in the Bank contract.

It was an underhanded ending to a match that exemplified the best Punk, Orton, Daniel Bryan, Christian, Sheamus and a returning Rob Van Dam had to offer. Billed appropriately as “All-Stars,” six of WWE’s true greats — minus a missing Kane who was sidelined by a savage Wyatt Family attack — risked it all for a guaranteed WWE Title opportunity and, debatably, an instant championship reign, as history’s proven.

Still, the talk of the WWE fans exiting the Wells Fargo Center focused not on dramatic flips and falls, but on the realization that the friendship between Punk and Heyman was even more strained than the WWE Universe imagined — and that a long coiled Viper is once again ready to strike.

The final match of the night began with a hero’s welcome for RVD who was returning to WWE in the city where he made his name. Six years removed from his last WWE run, the ageless Van Dam looked as good as he did when he first entered Extreme Championship Wrestling nearly two decades ago. The Philly fans, sensing a classic before the bell even rang, began to shake the arena as the ring filled up with future WWE Hall of Famers. And then all hell broke loose.

Of course, we’re HustleTweeting about Paul Heyman’s double cross of CM Punk, and you’re more than welcome to join the conversation by following us on twitter HERE or write us directly at hustleoncrave@gmail.com  Hey, have you checked out the Hustle’s Ultra High Quality You Tube Channel, with exclusive videos featuring OUR WORLD EXCLUSIVE WITH MIKE TYSON … BROCK LESNAR’S “HERE COMES THE PAIN” … ICE-T AND COCO’s SEX SECRETS … TEEN SENSATION TAYLOR MOMSEN … UFC BAD BOY NICK DIAZ … THE WALKING RIOT MISSY HYATT if you’re not subscribing, you’re missing something … and by the ways cheapos, it’s FREE! Yes, absolutely 100 percent FREE! What are you waiting for? Check it out HERE!

WARNING: CLICKING ON THE PHOTOS BELOW WILL LEAD YOU TO UNCENSORED
GRAPHIC PHOTOS OF THE BLOODY ENCOUNTER BETWEEN CM PUNK
AND PAUL HEYMAN FROM THE WWE MONEY IN THE BANK MAIN EVENT!