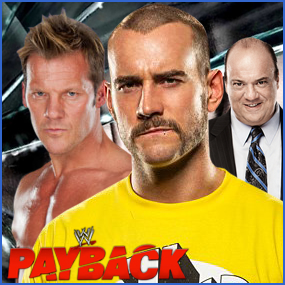 The Second City Saint’s homecoming is complete … and our very own Hustler De Tuti Hustlers Paul Heyman had the best seat in the house!

CM Punk is back, and our very own Hustler De Tuti Hustlers Paul Heyman is with him! The Best in the World returned to WWE since THE EPIC BATTLE WITH THE UNDERTAKER AT WRESTLEMANIA and he did so in spectacular fashion with a huge victory over Chris Jericho in Punk’s own hometown of Chicago. According to WWE.com:

CHICAGO – With all due respect to Kanye West, that’s how you have a Chi-town homecoming.

Windy City native and recently AWOL Superstar CM Punk made his grand return to the ring at WWE Payback, defeating Chris Jericho in a bout that had a solid chance of not happening at all after he seemingly walked out of WWE the night after WrestleMania. Punk’s absence left everyone with more questions than answers, but while the WWE Universe has certainly thought about him now and then, he showed little impetus of returning to the ring … until Payback unfolded in his hometown of Chicago.

With his back to the wall, the former WWE Champion not only saved face for himself (not to mention Paul Heyman, who accepted Jericho’s challenge on the then-absent Punk’s behalf), but reasserted his dominance over Y2J and earned a fresh start following three heartbreaking losses, all in one fell swoop.

With that being said, it was hardly a cakewalk for the self-professed “Best in the World.”

Of course, we’re HustleTweeting about join the conversation by following us on twitter HERE or write us directly at hustleoncrave@gmail.com  Hey, have you checked out the Hustle’s Ultra High Quality You Tube Channel, with exclusive videos featuring OUR WORLD EXCLUSIVE WITH MIKE TYSON … BROCK LESNAR’S “HERE COMES THE PAIN” … ICE-T AND COCO’s SEX SECRETS … TEEN SENSATION TAYLOR MOMSEN … UFC BAD BOY NICK DIAZ … THE WALKING RIOT MISSY HYATT if you’re not subscribing, you’re missing something … and by the ways cheapos, it’s FREE! Yes, absolutely 100 percent FREE! What are you waiting for? Check it out HERE!

CLICK ON THE PICS BELOW TO SEE THE ENTIRE OFFICIAL WWE PHOTO
GALLERY FEATURING THE HISTORIC RETURN OF CM PUNK AT PAYBACK!