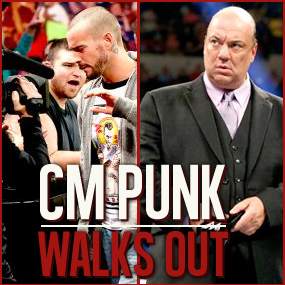 The entire WWE Universe is in shock, as The Best In The World stops mid-thought on Monday Night RAW, and walks off camera in one of the most emotional moments in recent memory … all on live worldwide TV!

Our very own Hustler De Tuti Hustlers Paul Heyman was left in shock as his best friend and confidante CM Punk got caught up in a wave of emotions and walked off the live WWE Monday Night RAW broadcast while discussing going up against The Undertaker at WrestleMania XXIX. It was a powerful, profound reminder of the emotional toll being “The Best in The World” has taken on Punk. At least, that’s one explanation.

CM Punk has often said that he can work wonders with the microphone, but a WWE Universe that was expecting a scathing opus in The Second City Saint’s first address since WrestleMania 29 were left with a whimper instead … and a cryptic one at that.

A visibly exhausted Punk had barely begun to speak on his loss to The Undertaker when he stopped mid-sentence, wearily looked around and cut his speech short by giving Paul Heyman an apologetic embrace. With that, the former WWE Champion handed off his sacred microphone and departed the stage, leaving the WWE Universe with more questions than answers as to what would come next. True to form, though, they were speechless in his wake.

CLICK HERE FOR 360 COVERAGE OF CM PUNK VS THE UNDERTAKER AT WRESTLEMANIA XXIX!

Of course, we’re HustleTweeting about CM Punk’s Walkout on WWE Monday Night RAW, and you’re more than welcome to join the conversation by following us on twitter HERE or write us directly at hustleoncrave@gmail.com  Hey, have you checked out the Hustle’s Ultra High Quality You Tube Channel, with exclusive videos featuring OUR WORLD EXCLUSIVE WITH MIKE TYSON … BROCK LESNAR’S “HERE COMES THE PAIN” … ICE-T AND COCO’s SEX SECRETS … TEEN SENSATION TAYLOR MOMSEN … UFC BAD BOY NICK DIAZ … THE WALKING RIOT MISSY HYATT if you’re not subscribing, you’re missing something … and by the ways cheapos, it’s FREE! Yes, absolutely 100 percent FREE! What are you waiting for? Check it out HERE!

CLICK ON THE PICS BELOW TO SEE THE ENTIRE OFFICIAL WWE
PHOTO GALLERY FEATURING CM PUNK’S DRAMATIC WALKOUT ON RAW!

WHAT DID WE REALLY WITNESS? 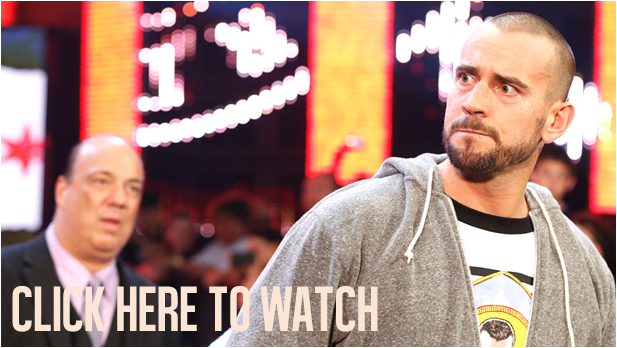