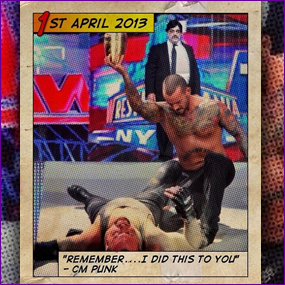 Our very own Hustler De Tuti Hustlers Paul Heyman impersonates the late Paul Bearer … and then CM Punk crosses a line by pouring the ashes from URN over a fallen Undertaker!

The buildup to WrestleMania XXIX concluded from the nation’s capitol, Washington DC in most controversial fashion as CM Punk left The Undertaker covered in the ashes from The Urn! It was one of the most shocking scenes in modern day WWE, and perhaps in the history of Monday Night RAW! Surely this episode will be the subject of a tremendous backlash, and the subject of a great deal of attention going into this Sunday’s historic WrestleMania from the Met Life Stadium in East Rutherford, New Jersey.

The Undertaker struck first as his cerebral, deeply personal rivalry with CM Punk comes to its apex, but The Deadman arrived at Raw on Monday not to throw hands but to deliver Punk his eulogy. With a heavy heart and boiling blood, The Lord of Darkness simply vowed that a defeat would not suffice for the man who took possession of the late Paul Bearer’s sacred urn. Whether The Streak lives or dies at The Show or Shows, The Phenom promised, “[Punk] will not live to talk about it.”

As The Undertaker’s sermon concluded, though, a cadre of druids emerged from the entrance ramp while Paul Heyman held the urn aloft in a grotesque masquerade of The Father of Darkness’ famous entrance. When The Phenom moved to strike, a lone druid lashed out at him, revealing to be Punk in disguise.

“It’s over,” Punk said as he struck The Demon of Death Valley with the urn and upended its contents onto him, as sure a sign as any that it may be Undertaker who is interred within his own hallowed ground.

What’s your opinion on the controversial ending to the final RAW before WrestleMania XXIX? We’re HustleTweeting about it right now, and you’re more than welcome to join the conversation by following us on twitter HERE or write us directly at hustleoncrave@gmail.com  Hey, have you checked out the Hustle’s Ultra High Quality You Tube Channel, with exclusive videos featuring OUR WORLD EXCLUSIVE WITH MIKE TYSON … BROCK LESNAR’S “HERE COMES THE PAIN” … ICE-T AND COCO’s SEX SECRETS … TEEN SENSATION TAYLOR MOMSEN … UFC BAD BOY NICK DIAZ … THE WALKING RIOT MISSY HYATT if you’re not subscribing, you’re missing something … and by the ways cheapos, it’s FREE! Yes, absolutely 100 percent FREE! What are you waiting for? Check it out HERE!

WARNING: GRAPHIC PHOTOS AVAILABLE BY CLICKING ON THE THUMBNAILS!

THE CONTROVERSIAL ENDING TO THE LAST RAW BEFORE WRESTLEMANIA! 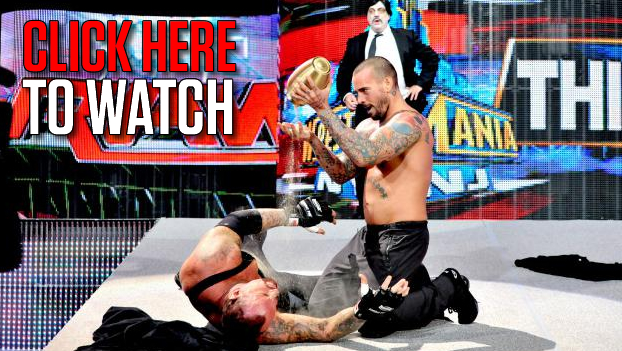