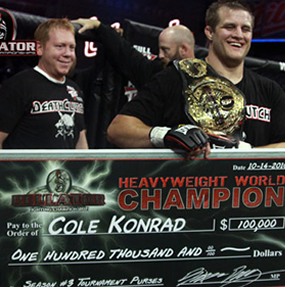 Konrad crushed Neil Grove to win the championship in the final round of the tournament, which took place at the Kansas City  (Missouri) Power & Light District for airing on FOX SportsNet.

Konrad, nicknamed "The Polar Bear," took Grove down early in the 1st round, and then made the decision to stand up and restart the action. This surprised many, as Grove is a heavy handed striker. But Konrad took Grove down again, and worked his way into a Keylock for a tap out victory with just 15 seconds to go in the opening round. Konrad, 26 years old, is now 7-0 in MMA, 5-0 with Bellator. We’re HustleTweeting about Cole Konrad, and about All Things UFC 121 this week, and you’re more than welcome to join the conversation. Follow THE HEYMAN HUSTLE on Twitter HERE or write to us at hustleoncrave@gmail.com

You can subscribe to our YouTube channel HERE, with all the latest videos and behind the scenes specials. For you old school social networkers, we’re on Facebook HERE and yes, we have a MySpace page HERE