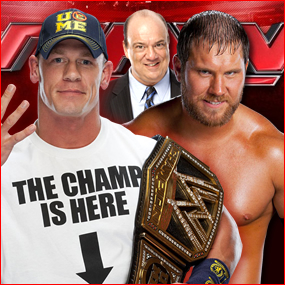 One week after a controversial count out victory over Triple H, “Paul Heyman Guy” Curtis Axel gets involved in the opening segment on WWE Monday Night RAW … and challenges The Champ!

Last week, NEW “PAUL HEYMAN GUY” CURTIS AXEL wrestled in the main event of WWE Monday Night RAW, in a match where TRIPLE H SUFFERED THE EFFECTS OF HIS STEEL CAGE MATCH AGAINST BROCK LESNAR … this week, Curtis Axel stepped up again. And the person against whom he stepped up is the WWE Champion, John Cena!

CALGARY, Alberta, Canada – It’s been a week since the WWE Universe has seen John Cena in action, but let it never be said that the man doesn’t know how to respond to a challenge. The Champ was all business in his first trip out of the Titantron since being plowed through it by Ryback at Extreme Rules, and more to the point, he decided to see Ryback’s Ambulance Match proposition and raise the “Human Wrecking Ball” the rarely-seen Three Stages of Hell Match (think a 2-out-of-3-Falls Match, with special rules for each round … in this case, Lumberjack Match, Tables Match and then an Ambulance Match).

Ryback was, of course, more than happy to accept and (in keeping with the theme of their bout) name himself Cena’s own personal Beelzebub. But the sudden arrival of Curtis Axel and Paul Heyman turned the pow wow into a Canadian Standoff, the endgame of which was that the reborn progeny of Mr. Perfect secured himself a one-on-one match with the WWE Champion for later that evening. Sometimes it pays to be a Paul Heyman Guy.

CLICK HERE FOR OUR COVERAGE OF BROCK LESNAR VS TRIPLE H FROM EXTREME RULES!

We’re HustleTweeting about #PaulHeymanGuy Curtis Axel, and you’re more than welcome to join the conversation by following us on twitter HERE or write us directly at hustleoncrave@gmail.com  Hey, have you checked out the Hustle’s Ultra High Quality You Tube Channel, with exclusive videos featuring OUR WORLD EXCLUSIVE WITH MIKE TYSON … BROCK LESNAR’S “HERE COMES THE PAIN” … ICE-T AND COCO’s SEX SECRETS … TEEN SENSATION TAYLOR MOMSEN … UFC BAD BOY NICK DIAZ … THE WALKING RIOT MISSY HYATT if you’re not subscribing, you’re missing something … and by the ways cheapos, it’s FREE! Yes, absolutely 100 percent FREE! What are you waiting for? Check it out HERE!