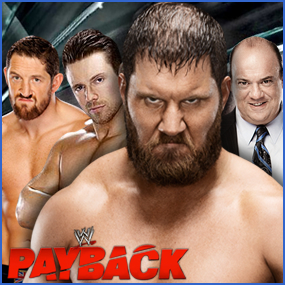 A rabid crowd witnesses history as our boss’ newest client scores one of the most unique pinfalls in Triple Threat Match history to become a champion who is #BetterThanPerfect!

When our very own Hustler De Tuti Hustlers Paul Heyman predicts greatness for someone, people take notice. And with good reason. His track record, we dare say, is pretty f’n spectacular. His recent signing of Curtis Axel falls right into that category. According to WWE.com:

CHICAGO – Where there’s a Paul Heyman Guy, there’s opportunity, and at WWE Payback Sunday night, Curtis Axel reinforced that reputation. Capitalizing on an opening afforded when Fandango suffered a concussion, Axel emerged victorious in a Triple Threat Match against Wade Barrett and The Miz to win the Intercontinental Championship – the same title Axel’s father, Mr. Perfect, held for more than 400 days over the course of his career. All three competitors shined at various stages of the contest. Early on, Axel slid out of the ring to be advised by Heyman while Barrett – who entered the match as the reigning titleholder – and Miz battled it out on the canvas. The former bare-knuckle fighter from Preston, England, went to town on the “Miz TV” host in the corner, but the newest Heyman Guy re-emerged, tossed the champion aside and nailed a “perfect” dropkick to Miz’s jaw.

In the middle of the matchup, the WWE Universe learned exactly what the former ECW owner sees in the third-generation Superstar. For what seemed like an eternity, Axel physically dissected The Awesome One with a series of impressive maneuvers, but once Barrett inserted himself into the proceedings, the Barrage took control.

Later, a refreshed and reinvigorated Miz went on fire, executing a nonstop assault of clotheslines and double-axehandles off the top turnbuckle. When it looked as though Miz had victory within reach, the tough Brit reversed a Figure Four attempt into The Winds of Change, but a pin was interrupted by Axel.

The young challenger was next to get caught in Barrett’s clutches, yet before the champion could successfully administer Wasteland, the son of Mr. Perfect nailed a Perfect Plex, only to have it broken up at two by a desperate Miz. In a dizzying turn of events, the former WWE Champion nailed the Skull Crushing Finale on Axel, but this time it was Barrett who broke up the pin by throwing Miz out of the ring. Barrett went for the cover, but Miz yanked him to the floor. By the time The Awesome One made the cover, too much time had elapsed and Axel kicked out.

Miz soon locked the Figure Four on Barrett in the center of the ring. With Barrett about to tap to the move Ric Flair made famous, Axel conferred with Heyman at ringside. Suddenly, the highly-impressive Heyman Guy took advantage of the situation. Axel dashed into the ring and pressed Barrett’s shoulders to the mat for a three count while the champion was still caught in Miz’s hold.

A stunned Miz looked up in disbelief, realizing what had just taken place. But Axel is now Intercontinental Champion, just like his father had before him, and on Father’s Day, to boot. Because when you’re a Paul Heyman Guy, good things just come your way.

Of course, we’re HustleTweeting about Curtis Axel and you’re more than welcome to join the conversation by following us on twitter HERE or write us directly at hustleoncrave@gmail.com  Hey, have you checked out the Hustle’s Ultra High Quality You Tube Channel, with exclusive videos featuring OUR WORLD EXCLUSIVE WITH MIKE TYSON … BROCK LESNAR’S “HERE COMES THE PAIN” … ICE-T AND COCO’s SEX SECRETS … TEEN SENSATION TAYLOR MOMSEN … UFC BAD BOY NICK DIAZ … THE WALKING RIOT MISSY HYATT if you’re not subscribing, you’re missing something … and by the ways cheapos, it’s FREE! Yes, absolutely 100 percent FREE! What are you waiting for? Check it out HERE!

CLICK ON THE PICS BELOW TO SEE THE ENTIRE OFFICIAL WWE PHOTO
GALLERY FEATURING CURTIS AXEL WINNING THE INTERCONTINENTAL TITLE!