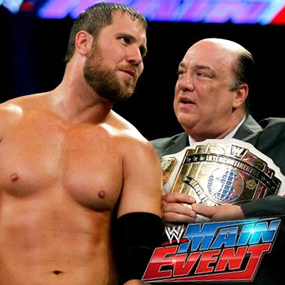 Intercontinental Champion Curtis Axel defeated the high flying Justin Gabriel in a heated contest on WWE Main Event on ION Television, with our boss Paul Heyman providing strategy and encouragement from ringside. According to WWE.com:

During Wade Barrett’s reign as Intercontinental Champion, Gabriel nearly bested the Bare Knuckle Brawler with the title at stake. Both Axel and Heyman seemed well aware of that fact and were all business when the opening bell rang.

The WWE Universe in Milwaukee ended up being treated to a highly-competitive contest and certainly one of the biggest challenges Axel has faced to date. Gabriel’s high-flying abilities and his exceptional speed did not allow the Intercontinental Champion to maintain momentum for very long. As the battle raged back and forth, Heyman – clutching the Intercontinental Title – was visibly concerned that his client may not escape victorious.

A number of near-falls in favor of Gabriel left Milwaukee salivating for an upset, but Axel remained resilient. Finally, the son of WWE Hall of Famer “Mr. Perfect” Curt Hennig managed to use the ring ropes to his advantage, stunning his opponent long enough to execute his signature maneuver for the win.

CLICK HERE TO READ ALL ABOUT CM PUNK’S RETURN TO HIS HOMETOWN OF CHICAGO WHICH WAS RUINED BY PAUL HEYMAN, INTERCONTINENTAL CHAMPION CURTIS AXEL AND RYBACK!

Of course, we’re HustleTweeting about Curtis Axel and Paul Heyman, and you’re more than welcome to join the conversation by following THE HEYMAN HUSTLE on the soon-to-be-publicly-traded Twitter HERE or write us directly at hustleoncrave@gmail.com  Hey, have you checked out the Hustle’s Ultra High Quality You Tube Channel, with exclusive videos featuring OUR WORLD EXCLUSIVE WITH MIKE TYSON … BROCK LESNAR’S “HERE COMES THE PAIN” … ICE-T AND COCO’s SEX SECRETS … TEEN SENSATION TAYLOR MOMSEN … UFC BAD BOY NICK DIAZ … THE WALKING RIOT MISSY HYATT if you’re not subscribing, you’re missing something … and by the ways cheapos, it’s FREE! Yes, absolutely 100 percent FREE! What are you waiting for? Check it out HERE!

CLICK ON THE PICS BELOW TO SEE THE ENTIRE OFFICIAL
WWE PHOTO GALLERY FEATURING CURTIS AXEL VERSUS JUSTIN GABRIEL!