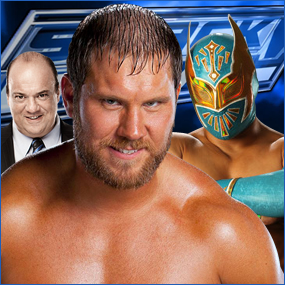 … and raises a very interesting point about the official decision in his match against Triple H from Monday’s Edition of RAW!

It’s been one hell of a week. BROCK LESNAR DEFEATED TRIPLE H IN A STEEL CAGE MATCH AT WWE EXTREME RULES … and then, the next night on Monday Night RAW, our boss PAUL HEYMAN INTRODUCED THE WWE UNIVERSE TO THE NEWLY RE-BRANDED “CURTIS AXEL!”

To give his new client maximum exposure, Paul took The Perfect Son to WWE Smackdown in Omaha, Nebraska, to make a rare appearance and wrestle in a match against Sin Cara. According To WWE.com:

After debuting Curtis Axel on Raw, Paul Heyman and his newest client journeyed to the blue brand to address the WWE Universe. Making reference to Triple H collapsing during their main event match on Monday night, Axel claimed that, “in one day, [he] did more than his legendary father and grandfather ever did” and that it was only “day 1 in building the brand of Curtis Axel.”

In the matchup that followed against Sin Cara, Axel backed up those strong words, ducking out of the way when the high-flyer soared at him from the top rope and hitting his masked opponent with a swinging neckbreaker for the three-count.

Of course, we’re HustleTweeting about “Paul Heyman Guy” Curtis Axel, and you’re more than welcome to join th conversation by following us on twitter HERE or write us directly at hustleoncrave@gmail.com  Hey, have you checked out the Hustle’s Ultra High Quality You Tube Channel, with exclusive videos featuring OUR WORLD EXCLUSIVE WITH MIKE TYSON … BROCK LESNAR’S “HERE COMES THE PAIN” … ICE-T AND COCO’s SEX SECRETS … TEEN SENSATION TAYLOR MOMSEN … UFC BAD BOY NICK DIAZ … THE WALKING RIOT MISSY HYATT if you’re not subscribing, you’re missing something … and by the ways cheapos, it’s FREE! Yes, absolutely 100 percent FREE! What are you waiting for? Check it out HERE! 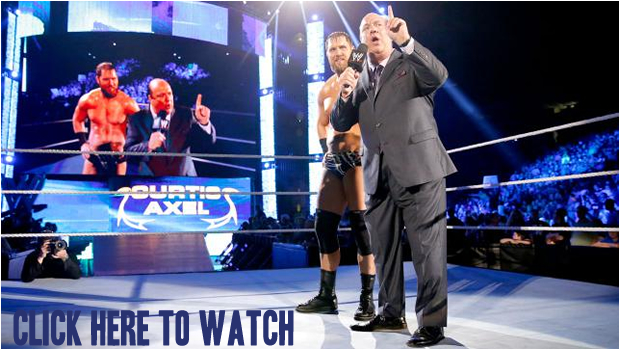