Philadelphia Goes EXTREME as Paul Heyman is Ejected From Ringside ... But Curtis Axel Still Defeats The Miz at WWE Money In The Bank 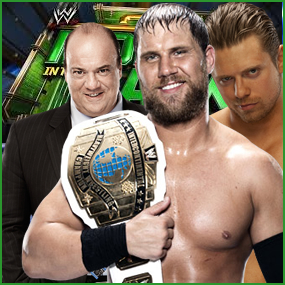 The Intercontinental Heavyweight Championship Match takes some bizarre turns as The Perfect New “Paul Heyman Guy” defends his title against the number one contender!

It is shaping up to be a wild night in Philadelphia, as Rob Van Dam is set to return to his old stomping grounds, and our very own Hustler De Tuti Hustlers Paul Heyman’s presence at ringside is heralded as a huge moment for the Philly faithful. According to WWE.com:

PHILADELPHIA — Young Intercontinental Champion Curtis Axel has a few less doubters thanks to a big win over former WWE Champion The Miz. The victory is Axel’s second on the pay-per-view stage in as many months.

Going into the bout, Miz admitted to being the underdog, thanks to the “Paul Heyman presence” in Axel’s corner. In a clever move early in the match, The Awesome One feigned being hit in the face by Heyman. The ref bought into the ruse and Axel’s mentor was immediately ejected from ringside, forcing to Axel to fight on alone.

As the two waged war for the prestigious Intercontinental Title, Axel came close to victory with a Perfect Plex, but Miz kicked out  and managed to lock Axel in a Figure-Four Leglock. The champion reversed the hold, almost forcing Miz to tap out.

Ultimately, Axel put Miz away with a new neckbreaker and bulldog hybrid to the canvas for the win.

Coming into Money in the Bank, the young champion had to overcome a bit of a losing streak (he lost twice to Chris Jericho). Then under the bright lights and scrutiny of the pay-per-view stage, Axel had to defend his title without Heyman at ringside. But Curtis Axel did not miss a step, proving his championship mettle.

Now, one must question what is next for Miz? Can the Superstar who headlined WrestleMania XXVII rebound from his failed second attempt at the Intercontinental Title? What is The Awesome One’s next move?

Of course, we’re HustleTweeting about Curtis Axel vs The Miz at WWE Money in the Bank, and you’re more than welcome to join the conversation by following us on twitter HERE or write us directly at hustleoncrave@gmail.com  Hey, have you checked out the Hustle’s Ultra High Quality You Tube Channel, with exclusive videos featuring OUR WORLD EXCLUSIVE WITH MIKE TYSON … BROCK LESNAR’S “HERE COMES THE PAIN” … ICE-T AND COCO’s SEX SECRETS … TEEN SENSATION TAYLOR MOMSEN … UFC BAD BOY NICK DIAZ … THE WALKING RIOT MISSY HYATT if you’re not subscribing, you’re missing something … and by the ways cheapos, it’s FREE! Yes, absolutely 100 percent FREE! What are you waiting for? Check it out HERE!

CLICK ON THE PICS BELOW TO SEE THE ENTIRE OFFICIAL WWE PHOTO
GALLERY OF INTERCONTINENTAL CHAMPION CURTIS AXEL VS THE MIZ!