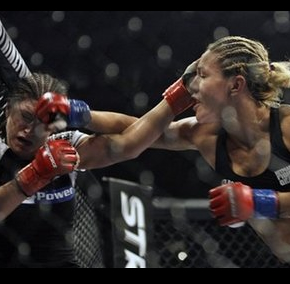 Cris “Cyborg” Santos defeated Gina Carano via TKO with 1 second left as the buzzer was going off in the main event of the StrikeForce show on Showtime tonight. Carano was a game fighter, but no match for Cyborg’s relentless attack.

I have confirmed Paul Heyman will be writing a blog on the fight, and on StrikeForce for the site on Monday.

Just my two cents, it was a hell of a fight.

CHECK OUT THE 15 HOTTEST STORIES ONLINE