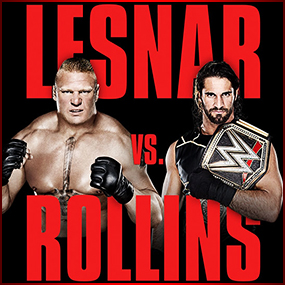 Tonight at WWE Battleground we almost saw The Beast Incarnate regain his WWE World Heavyweight Championship, but in a unpredictable turn of events, The Phenom returned! Right before Brock could pin Seth Rollins after 13 suplex’s and 2 F5’s, Brock Lesnar looked like he’d seen a ghost as he stood across from The Undertaker for the first time since conquering The Streak at WrestleMania 30.

Everyone knew it was going to take an act of God for Seth Rollins to walk away from his WWE World Heavyweight Championship defense against Brock Lesnar with the title still around his waist. What happened at WWE Battleground was close to it.

In the closing moments of a harrowing, physical contest, just as Lesnar was covering a battered and beaten Rollins following an F5, the lights in the Scottrade Center cut to black, the bell tolled and The Undertaker made his return to WWE.

The champion and the official had escaped the ring under cover of darkness, leaving only The Phenom and the man who broke his legendary WrestleMania Streak. The two titans considered one another from opposite sides of the squared circle. Brock’s eyes displayed shock, surprise, perhaps even a bit of fear. The Deadman’s eyes burned with fury. He’d been planning this moment since the night of April 6, 2014. That much was clear.

And then they went at it with the unbridled rage of two lions fighting over a fresh carcass. Undertaker tried for the chokeslam, which Brock avoided and turned into an F5. The Deadman slipped away from Lesnar’s paws, though, and, shockingly, kicked him right between the legs. It was foul play, but it crumbled The Beast and gave The Phenom a chance to hit a massive chokeslam and then a devastating Tombstone to the 1 in 22-1. Yet another spine jarring Tombstone followed moments later.

The Undertaker dropped to a knee and struck his signature pose in the center of the ring as lighting crashed and his haunting theme echoed throughout the arena. It was a thrilling moment, but as he made his way out of the ring — and the event went off the air, signaling a No Contest ending to the title match — you couldn’t help but feel a bit disarmed by the frenzied look in The Undertaker’s face. Paul Heyman may have christened his Beast the “God of Violent Retribution,” but on this night that name was more befitting of The Undertaker.

Of course, we’re HustleTweeting about The Undertaker’s return, and you are more than welcome to join by following the Hustle on Twitter HERE or write to us directly at hustleoncrave@gmail.com Hey, have you checked out the Hustle’s Ultra High Quality You Tube Channel, with exclusive videos featuring the #HUSTLEBOOTYTEMPTATS SUPERMODEL OF THE YEAR … OUR WORLD EXCLUSIVE WITH MIKE TYSON … BROCK LESNAR’S “HERE COMES THE PAIN” … ICE-T AND COCO’s SEX SECRETS … MMA BAD BOY NICK DIAZ … the list goes on and on, so if you’re not subscribing, you’re missing something … and by the ways cheapos, it’s FREE! Yes, absolutely 100 percent FREE! What are you waiting for? Check it out HERE!

CLICK ON THE PICS BELOW TO SEE THE ENTIRE OFFICIAL WWE PHOTO GALLERY
FEATURING BROCK LESNAR,  PAUL HEYMAN, SETH ROLLINS AND THE RETURN OF THE UNDERTAKER! 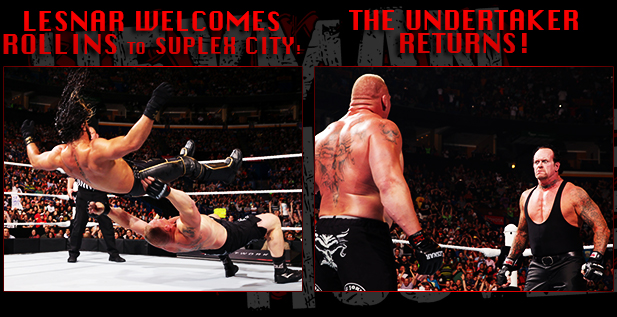