Behind The Scenes on the Set of GI JOE 2: Retaliation with Dwayne "The Rock" Johnson 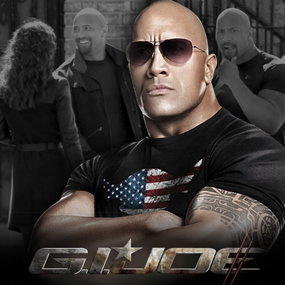 The set of GI Joe 2: Retaliation is jumpin’ as the crew approaches the Labor Day Weekend. Dwayne “The Rock” Johnson, who is seen in these behind-the-scenes photos with actress Adrianne Palicki, sent shockwaves across the Twitterverse when he tweeted confirmation that comedic actor DeRay Davis from Semi-Pro and  Jumping The Broom has signed on for a part in the Jon Chu-directed sequel. Rock;’s first message stated  “On set now. We’re all waiting for ONE actor: @DeRayDavis. Very late. Time to get ya ass whupped son..”

Davis is just the latest of many new additions to the G.I. Joe cast, which also includes Palicki, Bruce Willis, Ray Stevenson,  Joseph Mazzello, Walton Goggins, RZA, D.J. Contra and more. Returning from the first film will be Channing Tatum, Ray Park and Byung-hun Lee. The movie is currently in production and is scheduled to hit theaters on June 29th 2012.

Of course, we’re HustleTweeting about GI Joe 2, and you’re more than welcome to join the conversation by following the Hustle on Twitter HERE or write to us directly at hustleoncrave@gmail.com  Hey, have you checked out the Hustle’s Ultra High Quality You Tube Channel, with videos featuring ICE-T AND COCO’s SEX SECRETS … THE ULTIMATE WELTERWEIGHT BAD ASS NICK DIAZ … CONTROVERSIAL TEEN SENSATION TAYLOR MOMSEN … LEGENDARY MMA PIONEER FRANK SHAMROCK … THE WALKING RIOT MISSY HYATT … if you’re not subscribing, you’re missing something … and by the ways cheapos, it’s FREE! Yes, absolutely 100 percent FREE! What are you waiting for? Check it out HERE!

CLICK ON THE PICS BELOW TO SEE DWAYNE JOHNSON ON THE SET
OF THE 2012 BLOCKBUSTER “GI JOE 2: RETALIATION!”