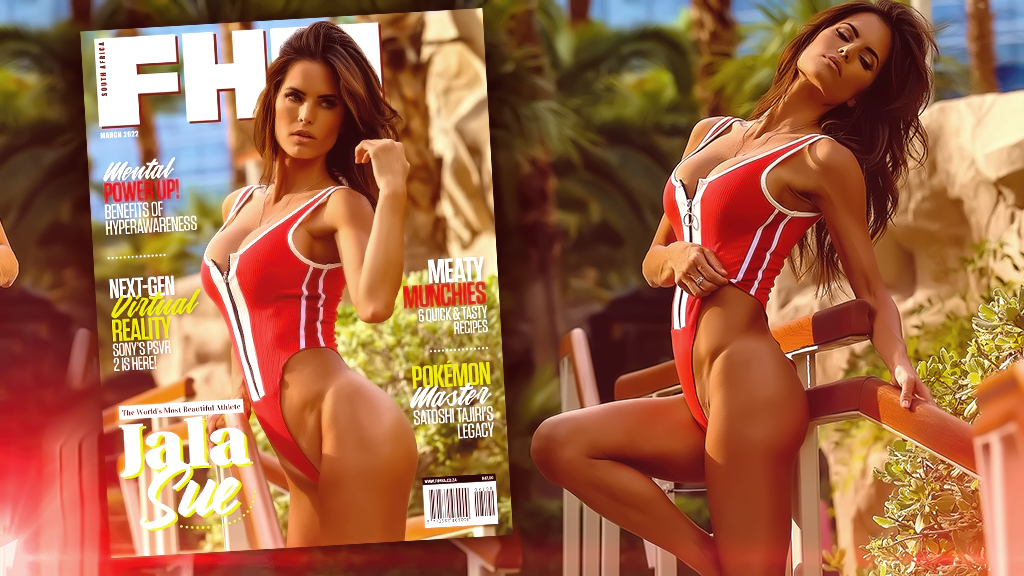 This Hustle feature is a special co-exclusive with FHM. As a special bonus, we are featuring the entire sensational photoshoot by Harry – LHGFX Photography!

You will most likely not believe what we’re about to tell you, but we promise you, it’s 100 percent true.

Jala Sue is the mother of four children, and balances two careers that have made her world famous.

See? We told you. You most likely don’t believe us. But nevertheless, it’s true.

42 year old Jala Sue, the World’s Most Beautiful Athlete, is a competitive paddle boarding champion from Northern Michigan who is also, at the very same time, one of the most popular supermodels on the face of the planet today.

“Jala Sue is an inspiration to everyone who knows her,” commented Harry from LHGFX Photography, who collaborated with Jala Sue to create these astonishingly sexy images. “We all marvel at how she balances being a full time mom, a championship athlete and a world class supermodel!”

It’s Jala Sue‘s career as a supermodel that has her trending worldwide on an almost-daily basis, as she is perhaps the most popular member of an exclusive roster of supermodels under WWE Legend Paul Heyman‘s #HustleBootyTempTats supermodel banner.

Heyman discovered Jala Sue when a number of paddle boarding fans started an email and social media campaign to get Jala Sue noticed.

Heyman, who was named one of the top 100 global marketers by the prestigious Ad Age magazine, is – much like Jala Sue – a known multi-tasker, and besides his WWE career, he’s the co-owner of a New York-based agency, The Looking4Larry Agency aka L4L.

“Our agency was doing supermodel photoshoots in Las Vegas for our Heyman Hustle website, and we were besieged with emails and letters and tweets and Instagram messages from fans of Jala Sue,” Heyman noted.

So he immediately flew Jala Sue out to L4L’s Las Vegas office and Heyman Hustle production set, located at the former Hard Rock Hotel and Casino. The moment he met Jala Sue, he knew he discovered a superstar.

“I’ve made my living describing larger than life personas in a grand environment,” Heyman laughed. “I can only describe Jala Sue… (deep sigh)… as indescribably gorgeous!”

Heyman, prone by nature and environment to hyperbole, can’t be accused of embellishing the image he’s presenting of his star supermodel. One exec from the old Hard Rock Hotel and Casino (now owned by Richard Branson‘s Virgin group and re-branded the Virgin Hotels Las Vegas) exclusively told us, “Jala Sue became the most sought-after supermodel in Las Vegas before her first photoshoot on the property was even half-over.”

Continuing, he exclaimed, “what really made us all take notice was the fact Jala Sue worked on set from early morning until about 1 or 2 in the morning that first day of shooting, and was up doing a three hour stretching and yoga session the next morning at 5:45am, right back in from of the cameras.”

Our former Hard Rock exec wasn’t done backing up Heyman’s claims about Jala Sue. “Most remarkable of all, Jala Sue had the very best attitude of any model or athlete or celebrity I’ve ever worked with, and one way or another they all appeared here for us in Las Vegas. Not only is Jala Sue perhaps the most stunningly beautiful woman I’ve ever met in my entire life, she’s also the most humble and most personable. Talk with her about her enormous accomplishments, and she’ll tell you how much her children inspire her. She’s just an amazing human being!”

So, besides being a supermodel hyped by a legend, a mom of four and the World’s Most Beautiful Athlete, what other worlds does Jala Sue want to take over in 2022?

“That remains to be seen,” Jala Sue said with an inviting smile. “I’m always up for a new adventure. In fact, I think it’s fair to say, I live for the challenge of it all!”

We’re HustleTweeting about #HustleBootyTempTats supermodel (and FHM cover model) Jala Sue, and you’re more than welcome to join the conversation on the Hustle Twitter HERE … on our ridiculously sensational Instagram HERE … or on our Facebook page HERE!