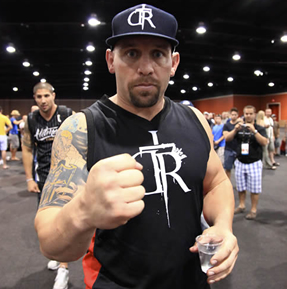 THE HEYMAN HUSTLE photographed UFC Interim Champion Shane Carwin as he departed the MGM Grand this afternoon. The 12-0 undefeated native of Greeley, Colorado has just finished his PUBLIC WORKOUT, and was on his way backstage for screen caps, UFC.com interviews, official photos, and interviews that will air as part of the 2-hour Spike TV special before the show, and as part of the UFC 116 pay per view.

CLICK HERE TO READ ALL ABOUT SPIKE TV’s BIG TWO HOUR SHOW THIS SATURDAY NIGHT, AS WELL AS THEIR DECISION TO CARRY THE UFC 116 WEIGH-INS!

Shane Carwin and Brock Lesnar are schedule for a 5 round contest this Saturday night at the MGM Grand Garden Arena, with the winner emerging as the Undisputed Heavyweight Champion of the World. The match will be the main event of UFC 116, with Chris Leben vs Yoshihiro Akiyama in a 3 round Middleweight contest as the semi-main event of the evening.

To see THE HEYMAN HUSTLE‘s exclusive pics of Shane Carwin after his UFC 116 Open Workout this afternoon at the MGM Grand, CLICK HERE